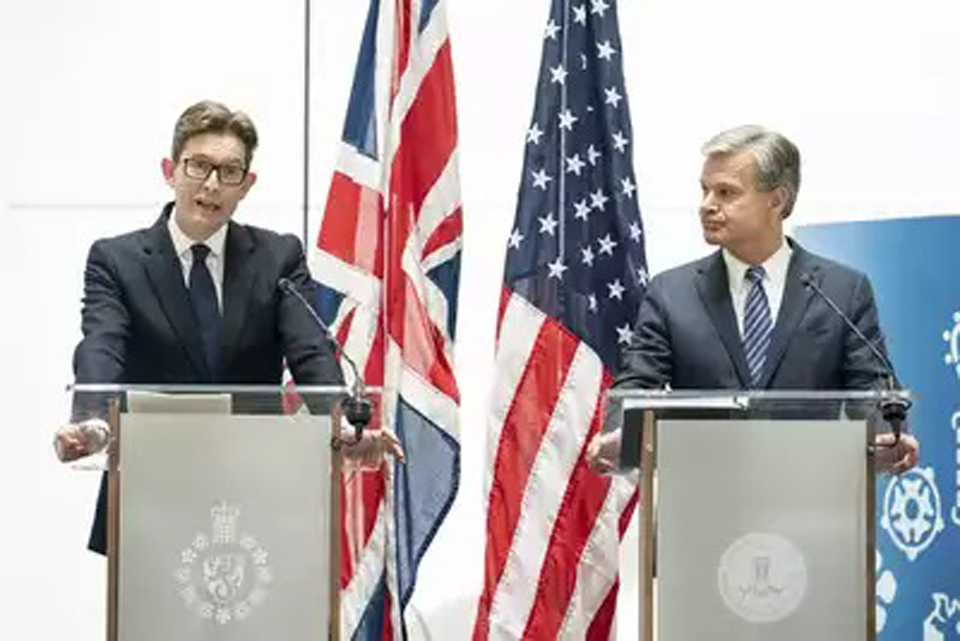 LONDON, July 7, 2022 (BSS/AFP) - The heads of MI5 and the Federal Bureau of
Investigation warned Wednesday about China's commercial espionage thrust in
the West, in a rare joint address at the British intelligence service's
London headquarters.

Speaking to an audience of officials and business executives in Thames House,
MI5 Director General Ken McCallum and FBI Director Chris Wray said the threat
from Chinese spies is paramount in both countries and only continues to grow.

"Today we're running seven times as many investigations as we were in 2018,"
he said.

"We plan to grow as much again, while also maintaining significant effort
against Russian and Iranian covert threats."

He said Chinese intelligence takes a slow and patient approach to developing
sources and gaining access to information, and few of those targeted
recognised themselves as such.

"By volume, most of what is at risk from Chinese Communist Party aggression
is not, so to speak, my stuff. It's yours -- the world-leading expertise,
technology, research and commercial advantage developed and held by people in
this room, and others like you."

Wray said China's threat was a "complex, enduring and pervasive danger" to
both the United States and Britain, as well as other allies.

China is "set on stealing your technology, whatever it is that makes your
industry tick, and using it to undercut your business and dominate your
market," he added.

The two also warned that a Chinese invasion of Taiwan, which Beijing views as
its territory, would cause a massive disruption to global commerce and
industry.

They urged businesses to stay alert and report possible threats.

"The Chinese Communist Party is interested in our democratic, media and legal
systems. Not to emulate them, sadly, but to use them for its gain," said
McCallum.

Beijing rejected the accusations, describing them as "completely groundless".

"The so-called cases they listed are pure shadow chasing," the spokesperson
of the Chinese embassy in Britain said in a statement posted on the mission's
website.

"They spread all kinds of lies about China in order to smear China's
political system, stoke anti-China and exclusion sentiment, and divert public
attention in order to cover up their own infamous deeds."