Japan is welcome to set up automobile industries in Bangladesh: FBCCI President 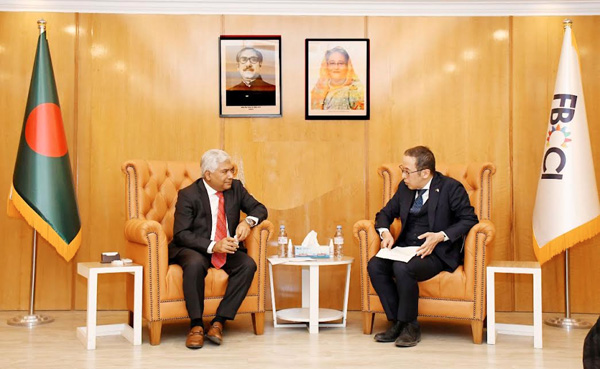 DHAKA, Jan 25, 2023 (BSS) - The Federation of Bangladesh Chambers of Commerce and Industry (FBCCI) has urged the Japanese investors to set up automobile industries in Bangladesh.

FBCCI could work closely with Japanese entrepreneurs in this regard.

FBCCI President made this call during a courtesy meeting with the Japan External Trade Organization (JETRO) delegation today at the FBCCI office in the capital. The visiting delegation was led by the president of JETRO Kazushige Nobutani.

Md. Jashim Uddin said that the Bangladeshi people love Japan while there is a huge demand for Japanese products, especially automobiles.

"On the road, you can see various Japanese cars everywhere in Bangladesh. Japan can come forward to exploit the vast business potentials in Bangladesh. The Japanese Investors can grab the market by setting up automobile factory in Bangladesh," he said.

Jashim said that setting up factories can be beneficial for both the countries as the price of the products would be relatively low.

The FBCCI President said that Bangladesh has huge potentials. "We're now on our way to a trillion-dollar economy. In order to achieve this target, Bangladesh is going through policy and strategic transformation. The Government and the Private sector are also working together to facilitate trade and business," he added.

He also informed the JETRO delegation about the Bangladesh Business Summit 2023 which is going to be organized in March this year on the occasion of the 50th founding anniversary of the FBCCI.

He mentioned that the FBCCI is expecting active participation from the Japanese side. The FBCCI President said, "Bangladeshi entrepreneurs are interested in expanding trade with Japan. They have emphasized setting up eco-friendly and compliant industries. Technology transfer between both countries is essential to ensure sustainable industrialization," he added.

JETRO President Kazushige Nobutani congratulated the FBCCI on its 50 years of establishment. He also wished the grand success of the Bangladesh Business Summit.

Both Japan and Bangladesh have been working closely for a long time. The trade relations between the two countries will be accelerated through business-friendly policies and strategies, he added.