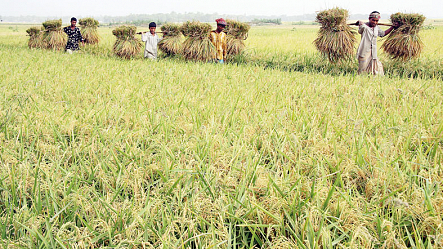 Like in the previous years, short duration Aman rice harvest is now helping
small and marginal farmers and farm-laborers in tackling the 'seasonal lean
period' that has already disappeared from the region 13 years back.

Officials of the Department of Agricultural Extension (DAE) said expanded
cultivation of short duration Aman rice was launched in 2009 aiming at
creating jobs for farm-laborers through early harvest of the crop during the
seasonal lean period.

Earlier, a poverty-like situation was being created for lack of agricultural
activities during the months of 'Aswin' and 'Kartik' causing untold miseries
to the poor and farm-labourers even 14 years ago.

"Of them, farmers have cultivated short duration varieties of Aman rice on
over 62,000 hectares of land across the region this season," he said.

Meanwhile, farmers have already harvested short duration Aman rice on 3,000
hectares of land till Sunday and got an average yield rate of 2.48 tonnes of
clean Aman rice (3.72 tonnes of paddy) per hectare of land.

Beginning from October, harvesting of short duration Aman rice will continue
till the end of November next.

They are happy getting excellent market prices of newly harvested Aman paddy
between Taka 1,000 and Taka 1,100 per mound (every 40 kilograms).