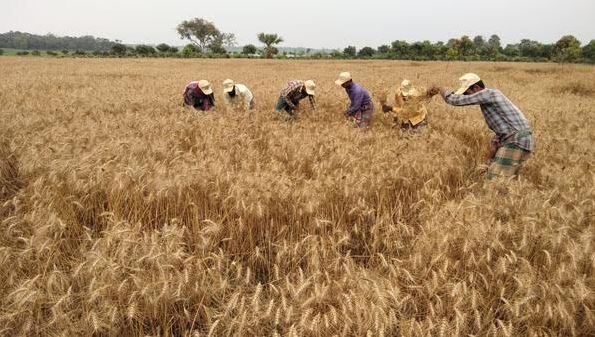 These were ascertained through different experimental plots of wheat, lentil,
potato and chickpea at many locations in Rajshahi, Chapainawabganj and
Naogaon districts recently.

The cash crops were cultivated in two separate demonstration plots, one
experiment and other farmers' practice, to evaluate the effects of liming
andorganic matter on soil properties, soil health and growth traits.

Dr Nurul Islam, Principal Scientific Officer of SRDI, said each of the
farmers were given all sorts of impute supports including fertilizer, labour,
water for irrigation and technical knowhow for farming crops on one bigha of
experimental plot.

Potato yield was 115 mounds per bigha in experimental plot against 90 mound
of farmers practice while the yield of chickpea was 13 mounds of experimental
plot against six mounds of conventional system, said farmer Saiful Islam of
Badhair village under Tanore upazila.

"I have harvested nine mounds of lentil from the experiment plot while six
mounds from his own conventional system," said Shariful Alam, another farmer
of Patari village under Shapaher upazila, adding that the liming and organic
matter system is cost-effective. Youth gets life imprisonment in a Rajshahi
rape case

Taimur Ali, a farmer of Parbatipur area under Gomostapur upazila, had
cultivated wheat on two bigha of lands and harvested 18 mounds of yield from
the one-bigha experiment plot while 12 mounds from the conventional one.

The farmers applied half-rated chemical fertilizer along with optimum organic
fertilizer and bio-pesticide in their fields in order to make them
financially benefited side by side with protecting the soil health.

Main objective of the experiment was to achieve more broad based and
sustainable outcomes in soil health, food security, environment management
and economic opportunity in the region.

"We have provided technical knowledge on proper and effective application of
organic methods in farming fields to the targeted farmers," he added.

It is also the energy source for soil microorganisms, which are the primary
agents that enhance the decomposition and release of minerals in the soil
system.

Dr Islam said bringing all the farming fields under liming and organic
fertilization is a big challenge but there is no way but face the challenge
to protect the soil health.

In the present context of exorbitant use of chemical fertilizer and
pesticides in farms, the issue of water and soil pollution is being judged as
a serious threat to public health.

The problem, however, can be mitigated to a greater extent through promoting
organic fertilization and creating public awareness on the issue.

Time has come to replicate the organic method to other areas to protect the
land and water from pollution which is very much important for environmental
balance and ensuring food security, he added.