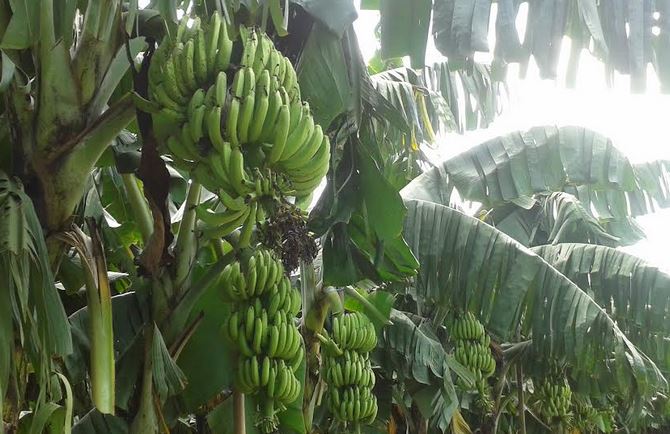 MANIKGANJ, Aug 18, 2022 (BSS) - Banana farming has been playing a vital role in improving the socio-economic condition of people in many areas of the district, bringing smiles on farmers' faces as it makes their fortune.

Farmers of Harirampur, Daulatpur and Ghior upazilas in the district have gained solvency by cultivating banana in their sandy land which previously remained uncultivated for a long time.

Most of those lands of remote char areas of the river Padma and Jamuna are situated for cultivating banana. The ultra-poor farmers of the district are now improving their economic conditions through banana cultivation.

Department of Agriculture Extension (DAE) office sources said bumper productions of banana and its fair prices have brought smiles on the faces of growers in three upazilas of the district.

Banana cultivators, especially women cultivators are playing a key role in banana farming in the areas.

Afroza Khatun, one of the banana cultivators of Ramchandrapur village under Harirampur upazila, said "I cultivated banana on 50 decimals of land. I planted 100 saplings of the local variety of banana three years ago and got a good profit."

After getting good returns, she planted 500 saplings of different varieties of banana including Sabri and Kobri in the next year.

Only three years ago, Afroza had to face serious hardships to maintain her family with the scant income of her husband. They were even forced to stop the education of their three children due to poverty. But now, they have no financial constraint as the cultivation of banana has changed their fate.

In the next year, she planted about 1,000 saplings of banana and in 2021, Afroza planted 2,000 saplings on five bighas of land. She expects an earning of Taka 1 lakh after deducting all costs of farming.

Once the river-eroded people of those areas had to lead a measurable life. But now about 5,000 farmers are making unexpected profits from banana farming.

Following Afroza, hundreds of poor cultivators of Haluaghat, Mehendipur, Notakhola, Harihordia and Harirampur char areas started banana cultivation and they are happy to get good production and reasonable prices.

Housewives Rahima Begum of Basantapur, Khurshida of Patgram, Khodeza of Harihardia and Amena of Notakhola village also started to cultivate banana to alleviate their poverty.

The farmers of the char areas collect banana saplings from Jhitka, Faridpur and Manikganj.

Momtaz Begum, 50, one of the marginal farmers of Jamuna Char area of Daulatpur upazila cultivated banana on 90 decimal of land last year and earned a profit of Taka 70,000.

Habiba, Monwara and Rahela of the same area said they are being benefited cultivating banana in their sandy land which remain barren for a long time.

Ontora, another woman farmer of Bhatarakandi village under Ghior upazila, said she lost her cultivable lands including homestead in the erosion of the Dhaleshwari river four years ago. After two years, her land reemerged and it was totally sandy. On the sandy land, Ontora planted 100 saplings of banana last year and earned Taka 40,000. This year, she cultivated banana on two bighas of land and she is expecting a good harvest.