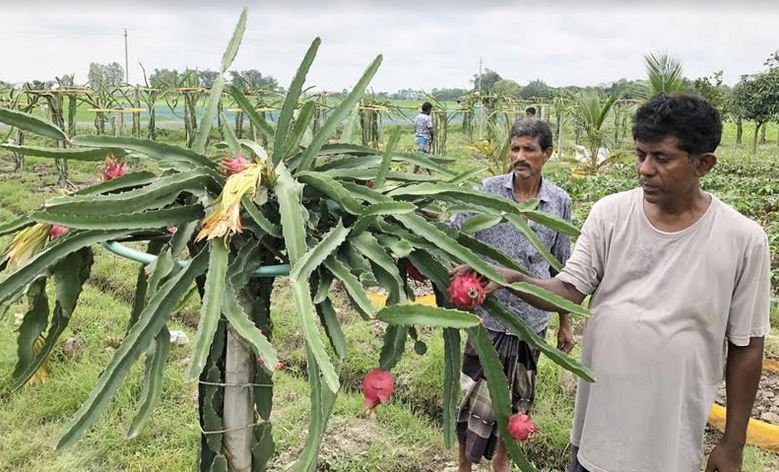 RAJSHAHI, July 30, 2022 (BSS) - Dragon fruit farming has started making the agro-based economy vibrant as many people built fortunes through its cultivation in the region, including its vast Barind tract, during the last couple of years.

Commercial farming of the fruit, a cactus species fruit, originally from Central America, South America, and nowadays common in Southeast Asia and China, is gaining popularity in the region gradually generating entrepreneurship.

As a whole, the cash crop is being judged as lucrative because it can be cultivated round the year.
Many other enthusiastic farmers have developed themselves as successful entrepreneurs through the dragon farming in the region after the best uses of its suitable climate condition and topography.

Asadul Islam Helal, a farmer of Bidirpur village under Godagari Upazila, has exposed himself as a new successful entrepreneur in this field.

He had planted some dragon seedlings being inspired with his long lasting hobby around five years back and subsequently he started farming on four acres of land in 2019 commercially.

"I have to spend around Taka nine lakh for the farming on each acre of land," said Helal while talking to BSS on Thursday, adding, around one year's time is needed to get fruit since the planting of seedlings.

During the summer season, fruits are harvested from June to November. "I have already harvested and sold dragon fruits valued around Taka 16 lakh during the current season," said Helal on his smiling face.

Currently, he has become a job-provider after leaving his institutional job earlier.
An orchard of dragon has been established on seven bighas of land in Pirijpur area under Godagari Upazila on a joint venture namely Pirijpur Agro Farm Limited.

Shish Muhammad, a shareholder of the farm said they are harvesting and selling dragon on both offline and online and they are getting enormous response from the wholesalers and retailers.

Rafiqul Islam along with three of his friends first started to cultivate the fruit on experimental basis in Kendobona area under Nachole Upazila in Chapainawabgonj district. After getting some profit, they became more interested in cultivating the profitable fruit on a large scale.

Rafiqul mentioned that the cultivation of the fruit is profitable and they are expecting good profit this year.

He said the cultivation process is not only easy but also the required investment is very low.

Abdul Matin, another farmer of Gofanagar village under Mohadevpur upazila in Naogaon, has set an example of becoming successful through dragon farming in the area.

On behalf of the Integrated Water Resource Management (IWRM) Project, various forms of cost-effective irrigation technologies like drip irrigation, fertigation and alternate furrow irrigation are being promoted for dragon farming in the drought-prone Barind area to reduce the gradually mounting cost for irrigation besides boosting soil productivity.

IWRM Project Manager Jahangir Alam Khan said dragon fruit is suitable for everyone to eat. Flesh and seeds are edible parts and they are eaten altogether. It supplies fiber which is digestive and helpful for a healthy liver. The rest of the fruit contains carbohydrates and water.

Dr Khalilur Rahman, professor of the department of internal medicine in Rajshahi Medical College Hospital, said the fruit has mild sweet tastes and is especially low in calories and the seeds are digested only if chewed. The flavonoids in dragon fruit lower the risk of heart disease and high blood pressure.

According to study, it also reduces oxidative stress and artery stiffness and it is thought to prevent complications associated with diabetes.

The high antioxidant levels lower the risk of many types of cancer, Dr Rahman elaborated.