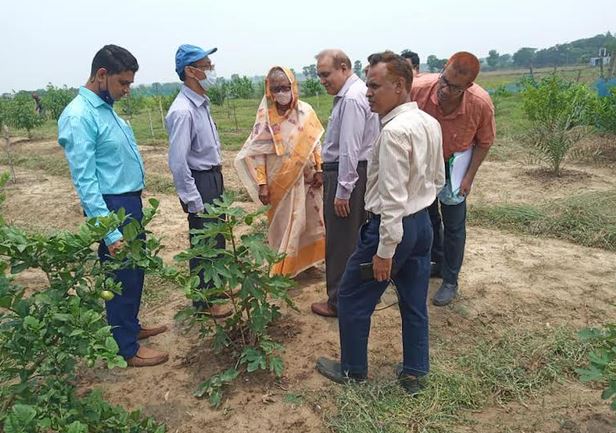 RAJSHAHI, June 18, 2022 (BSS)- A total of 52 demonstration orchards are being generated aimed at boosting production of high-valued non-conventional fruits and medicinal crops through popularizing farming of those in the Barind area.

Apart from this, more orchards of the highly valued fruits and field crops are being developed in personal lands and homesteads of the farmers in the dried area.

To this end, the process of distributing 4.15 lakh saplings and 2,000 kilograms of seeds of the nonconventional fruits and crops is progressing among the farmers free of cost on behalf of a project titled "Popularizing of High Valued Unconventional Fruit and Medicinal Crop in the Barind Area."

Barind Multipurpose Development Authority (BMDA), the ever-largest irrigation providing state-owned entity in the country's northwest region, has been implementing the project for the last couple of years to attain the specified targets.

BMDA Chairman Begum Akhter Jahan accompanied by its Executive Director Engineer Abdur Rashid and Executive Engineer Zinnurain Khan visited some of the demonstration plots of the crops and fruits at different areas in Paba and Godagari Upazilas in the district today.

The five-year project is being implemented in 13 upazilas of Rajshahi, Chapainawabgonj and Naogaon districts at a cost of around Taka 17.34 crore, said ATM Rafiqul Islam, Director of the project.

Some 1,500 farmers and 310 officers and employees are being imparted training on production, transplantation, nurturing and other techniques of the seedlings.

Rafiqul Islam said the project is being implemented with the main focus of boosting commercial farming of the high-valued fruits in the project-covering areas.

As a whole, the project is intended to inspire the farmers to high valued fruits farming commercially.

"We have set the target of establishing 22 orchards for fruits, 20 for field crops, eight for spices and two for beverages," he said, adding that most of the highly valued nonconventional fruits, field crops, spices and herbs will be brought under demonstration.

Upon successful implementation by June, 2025, the project is expected to contribute a lot to enhance the number of orchards of nonconventional fruits and medicinal crops.