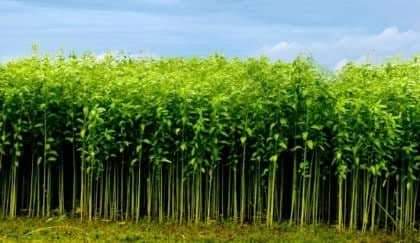 KHULNA, June 18, 2022 (BSS) - Over 4.57 lakh bales of jute are expected to be produced from 38, 110 hectares of land in four districts in Khulna Agriculture Zone during the current season.

Md Fazlul Haque, Additional Director of the Department of Agricultural Extension of Khulna Zone, said the field level officials and farmers are very much hopeful about better jute yield everywhere in the country's south-western region this season.

Currently, the farmers are seen nursing the growing plants of the golden fiber amid much enthusiasm as they got bumper production and lucrative market price for the last couple of years.

According to the officials concerned, around 14 to 15 years back, the farmers lost interest in jute cultivation as they did not get fair prices.

But, now they are getting fair price, making them more interested in jute cultivation.

Jute fiber is being sold at Taka 5,000 to 5,800 per mound at different hats and bazaars everywhere in the region creating a hope of getting back in the golden era of the cash crop in near future.

Basob Mondal, 54, a farmer of Gangarampur village under Batiaghata upazila in Khulna, said market price of jute was Taka 1,600 to 1,800 per mound earlier.

But, currently, the price has tripled, he said, adding none have thought about the present soaring price.

Md Sayed Ali, President of Bangladesh Jute Association (BJA), said jute was sold at Taka 1500 to Taka 2000 per maund in the previous seasons.

He said the price may further rise.

He also said price has hiked because of escalating demand of jute fiber in both domestic and global markets.
Syed Ali, however, said increased farming of jute could revive the past glory of the golden fibre, ushering a new era in the economy as well as saving the environment and soil health from further degradation