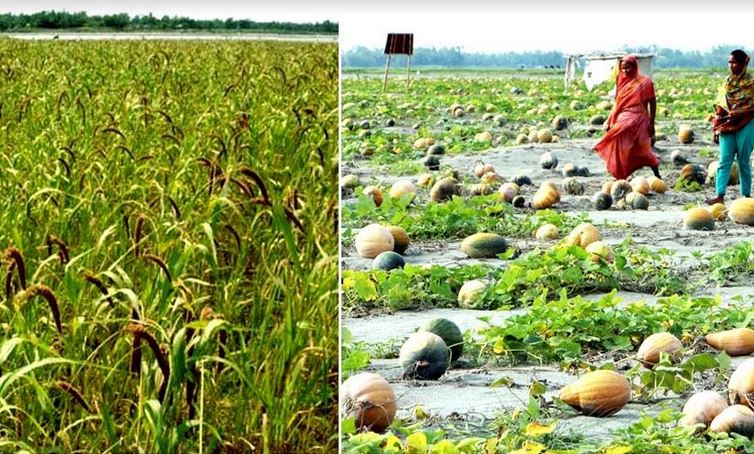 RANGPUR, May 14, 2022 (BSS) - Harvesting of various crops cultivated on charlands and dried up riverbeds has already completed with bumper production making hundreds of char people happy in Rangpur agriculture region this season.

Officials of the Department of Agricultural Extension (DAE) said crops were cultivated on around one-lakh hectares of charlands in the region during the just-ended Rabi season.

"Char and riverside people have completed harvest of their cultivated crops last week before commencement of the rainy season and got a bumper output," said Additional Director of DAE for Rangpur region Agriculturist Md. Emdad Hossain Sheikh.

Cultivation of various crops on char lands is expanding every year cutting poverty and improving livelihoods of hundreds of char people living in riverine areas of Nilphamari, Gaiabndha, Kurigram and Lalmonirhat in the region.

Getting various assistance from the government and different NGOs, hundreds of char people have achieved self-reliance through cultivating crops using intercropping methods on char lands during the last thirteen years in the region.

"The DAE puts highest efforts on ensuring best use of char lands through providing assistance and technologies to char people to increase crop output for improving their livelihoods and attaining food security amid changing climate," Hossain said.

Senior Coordinator (Agriculture and Environment) of RDRS Bangladesh Agriculturist Mamunur Rashid said people are becoming able to cultivate crops on charlands due to drying-up and silting-up of the rivers and lowering of underground water levels.

Char and riverside people have already completed harvesting crops successfully before commencement of the upcoming rainy season. However, jute crops on fewer low-lying char areas are growing under the threat of early floods.

Crop cultivation on dried up riverbeds and char lands is expanding every year on char lands and dried-up riverbeds of the Brahmaputra, Jamuna, Teesta, Ghagot, Dharla, Kartoa and other rivers and tributaries across the region.

"Around 55,000 char and riverside families have achieved self-reliance by farming crops on these lands improving their livelihoods with support of the DAE and different NGOs during the last thirteen years in the region," Rashid said.

Riverside and char people Mahbub Alam and Monwar Hossain of village Paschim Mohipur on the Teesta riverbank in the same upazila said they have changed their fortunes through cultivating various crops on char lands in recent years.

Nurul Amin of Machabandha villages in Chilmari upazila of Kurigram said char people got bumper output of their cultivated crops on the Brahmaputra river beds with excellent yield and better market prices this year.

What a waste: US campaigner wears his trash for a month

US to fly in baby formula on military contracted planes