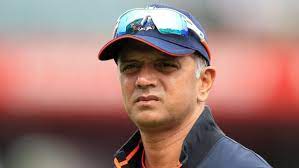 Rohit Sharma's men have haemorrhaged runs at the tail-end of their recent T20 series against both South Africa and Australia, conceding 73 in the last five overs of Tuesday's loss to the Proteas at Indore.

"We have to look at how we can get better," Dravid told reporters after the match.

"Certainly that's an area that we would like to improve and get better at because margins can be really small in these big tournaments, and every boundary can matter."

A back injury to Bumrah, who is known as "yorker king" for his ability to bowl the toe-crushing deliveries, has been a big blow to India ahead of the showpiece T20 tournament in Australia, which starts October 16.

Dravid said the team will miss the speedster but are in no hurry to name his replacement.

"Bumrah's absence is a big loss, he's been a great player but it happens, it's an opportunity for someone else to stand up," Dravid said.

He added that Mohammed Shami would be an "ideal" replacement but it was too soon to tell whether the pacer had recovered from his recent bout with Covid.

"We have to get reports as to how he is recovering and what's his status... and we will take a call," he said.

Top-ranked India's World Cup squad will depart for Perth on Thursday to get used to local conditions.

They begin their World Cup campaign in Melbourne against arch-rivals Pakistan on October 23.