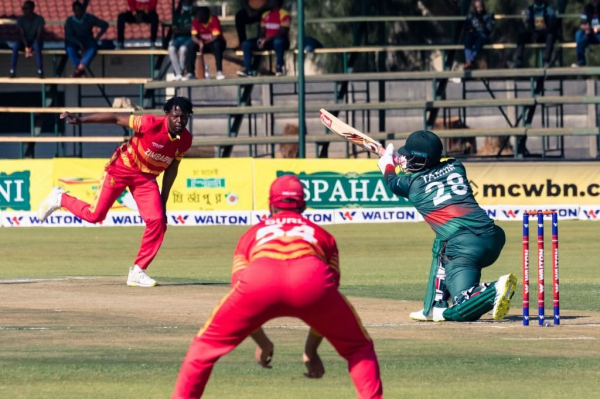 DHAKA, Aug 5, 2022 (BSS)-Bangladesh compiled a hefty 303-2, thanks to a superb performance of their top four batters in the first ODI of three-match series against Zimbabwe at Harare Sports Club today.

All of the top four batters hit half-centuries with Liton Das being the highest scorer with 81 off 89. Liton who struck nine fours and one six in his knock were well set for his sixth century but had to retire due to muscle cramp.

Even though his Test and T20 comeback was a disappointing one, Anamul Haque Bijoy finally proved his potential with a good comeback in the ODI format, scoring 73 off 62, that studded with six fours and three sixes. His knock was instrumental in propelling Bangladesh past 300 runs mark.

ODI skipper Tamim Iqbal however made 62 and in the process became the first Bangladeshi batter to reach 8000 runs milestone while Mushfiqur Rahim was not out on 52. Mahmudullah Riyad was also unbeaten on 20.

Regis Chakabva who is leading the side in absence of injured Sean Williams won the toss but opted to bowl first, which proved to be good for Bangladesh.

Tamim and Liton had slow start but they kept Bangladesh going with astute batting.

Tamim reached his 54th half-century off 79 balls and looked set for his century.

Sikandar Raza dismissed Tamim to break through after he struck nine fours for his 88-ball knock. That ended a 119-run opening stand, prompting Anamul Haque Bijoy to the crease for ODI format for the first time after three years.

As he and Liton got going well, the latter had a muscle cramp and had to retire hurt.

However Mushfiqur and Riyad then took the side past 300 runs with Mushfiqur hitting five fours for his 49 ball-52 not out.