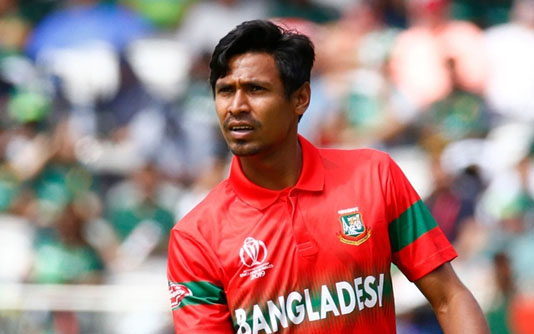 DHAKA, July 6, 2022 (BSS)— Bangladesh pacer Mustafizur Rahman stressed upon the requirements of maintaining a good economy rate in a bid to contain runs rather than taking wickets while bowling in the country outside of Asia.

According to him, the countries outside of Asia produce good wickets where batters get ample opportunity to hit the bowlers out of the park.

The wickets of the Asia are bowling friendly where the ball grips, giving him the advantage to make his cutter and slower, his two stock weapons, more effective, Mustafizur said.

“The Asian wickets are completely different to what we get outside of Asia. Outside Asia, the wickets are good to bat on. I think this is the reason (for my bad economy rate),” he said in a video message sent by the Bangladesh Cricket Board (BCB) today.
“I always try to give my best. In Asia, it is tough to put 150 plus total on the board. But outside in Asia, you will see a lot of 200 plus scores,” he mentioned.

Despite being left to 23-3, West Indies posted 193 in the second T20 game to beat Bangladesh by 35 runs. Mustafizur who always remains economical in the shortest format of the cricket, gave away 38 runs in four overs in that match.

In the beginning, Mustafizur had a lot of variation, which more often confounds the batters, specially his cutter and slower pace were hard to decode. But as the time progressed, the batters found their way to negotiate Mustafizur, adorably called as Cutter Master.

And the Fizz, as he was also adorably called, appeared to have lost his shine after the surgery on his shoulder.   However, he continues to fight to get himself back in the best rhythm.

"Maybe my performance was not as good as you expected after the surgery. But I think I was able to bring myself back. But there is no end to learning. You can learn every day. I am also trying to improve so that I can be like other good bowlers in the world. I tried to Improve my fitness by the advice of our coaches,” he remarked.

Mustafizur is working regularly with bowling coach Alan Donald at the moment to hone his skill further. The pacer found a way to improve with him, saying, "I have only done two sessions with him for T20 cricket. And I worked with him for ODIs in South Africa. There is still a lot of work to do with him. But from what I have seen, the coach's plans are very good.”