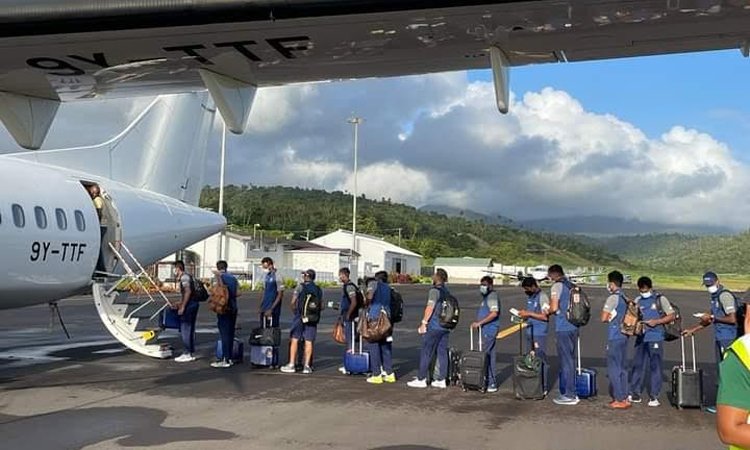 DHAKA, July 5, 2022 (BSS)—The Bangladesh team reached Guyana, the venue for the third and final T20 match, on Monday as they gear up to hold back the hosts West Indies after losing the second match by 35 runs.

The first match was washed out by rain and West Indies now lead the series 1-0. They reached the venue through air.

The West Indies cricket arranged a ferry for both Bangladesh and their players for the 180-km sea journey from Saint Lucia, where they played the second Test, to Dominica, the venue of the first two T20 matches but by the time they reached their destination, the effects of the sea had left them exhausted.

The teams and officials endured a tumultuous five-hour sea journey with several players falling sick and vomiting throughout the journey.

The Bangladesh Cricket Board (BCB) said the incident was portrayed as bigger in social media while the original situation was not much serious.

The BCB’s CEO Nizam Uddin Chowhdury said due to the Corona situation, there was no flight operating from Saint Lucia to Dominica and therefore the West Indies board arranged a ferry for both of the teams and officials.

“When the arrangement for the two teams and ICC and other officials are the same, there is nothing to complain about.

Moreover the journey was deferred due to the bad weather, which actually caused a concern, otherwise ferry journey is normal there.

Besides, the way of the situation was depicted in social media, it was not that serious,” the CEO said.

“But we’ll talk to West Indies cricket and show our concern so that this doesn’t happen in future.”

Bangladesh meanwhile started a practice session in Guyana to prepare them for the final match, which is important for them to win and avoid the whitewash.