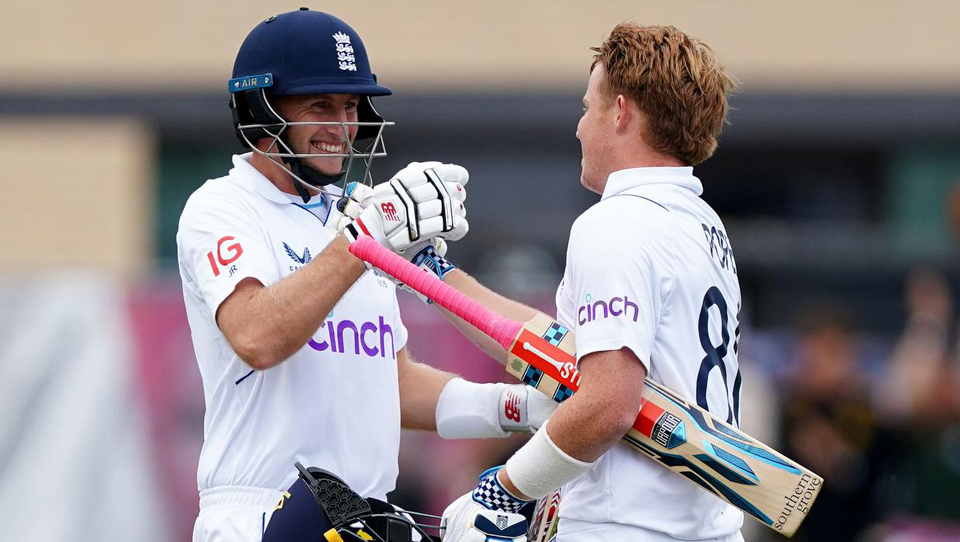 BIRMINGHAM, United Kingdom, July 2, 2022 (BSS/AFP) - Rishabh Pant gave Ben Stokes' England a taste of their own medicine with a superb counter-attacking century as India recovered from a top-order collapse to 338-7 at stumps on Friday's opening day of the Covid-delayed fifth Test.

Pant responded with a brilliant 146 off just 111 balls.
The wicketkeeper hit 19 fours and four sixes while dominating a partnership of 222 with fellow left-hander Ravindra Jadeja, 83 not out at stumps.

England came into this match following a 3-0 whitewash of Test world champions New Zealand, several times hitting themselves out of trouble in their first series under captain Stokes and red-ball coach Brendon McCullum.

The aggressive approach has been dubbed 'Bazball' in honour of McCullum's nickname, but the 24-year-old Pant has played this way for pretty much his entire career.

"In English conditions, especially where you know one bowler is pitching on the same spot, then it is important to disturb him," Pant told reporters. "As a player I give my 100 percent. Yes, I might play some different shots sometimes, but I try to play my percentage (strokes)."

England assistant coach Paul Collingwood paid tribute to Pant by saying: "He is certainly entertaining, doesn't take a backward step and he puts you under pressure."

But having seen England reach three stiff targets against New Zealand, he added: "The guys are confident they can chase down no matter what in the fourth innings."

Pant was especially severe on Jack Leach, swinging himself off his feet while slogging a four and later driving the left-arm spinner one-handed for six.

Leach, fresh from a 10-wicket haul and the player award in the third Test against New Zealand, conceded an expensive 71 runs in nine wicketless overs.

Part-time off-spinner Joe Root succeeded where the frontline bowlers had failed when Pant edged a drive to Zak Crawley at slip.

It was the end of a double century partnership that lasted a mere 39 overs, with Pant's hundred his fifth in 31 Tests and third against England.

Potts, who only made his international debut against New Zealand, had earlier added to his growing reputation by removing Virat Kohli for 11.

Potts had Hanuma Vihari plumb lbw for 20 before he induced Kohli to play on. It is nearly three years since India's star batsman made the last of his 27 Test hundreds.

Friday's match should have been played in Manchester last September only to be postponed just hours before the scheduled start because of coronavirus concerns within the India camp.

India, 2-1 up in the five-match contest, were without captain Rohit Sharma on Friday after he was ruled out with Covid-19. Fellow opener KL Rahul, who with Rohit scored heavily in England last year, had already been sidelined with a groin problem.

Both teams have experienced major upheaval since they last met, with Chris Silverwood and Root replaced as England's coach and Test captain respectively.

Kohli stepped down as India captain in February, with paceman Jasprit Bumrah leading the side for the first time at Edgbaston, while Rahul Dravid succeeded the retiring Ravi Shastri as coach in November.

By playing the game, albeit almost a year later than schedule, India are helping fill an estimated o40 million ($48 million) hole in English cricket's finances.