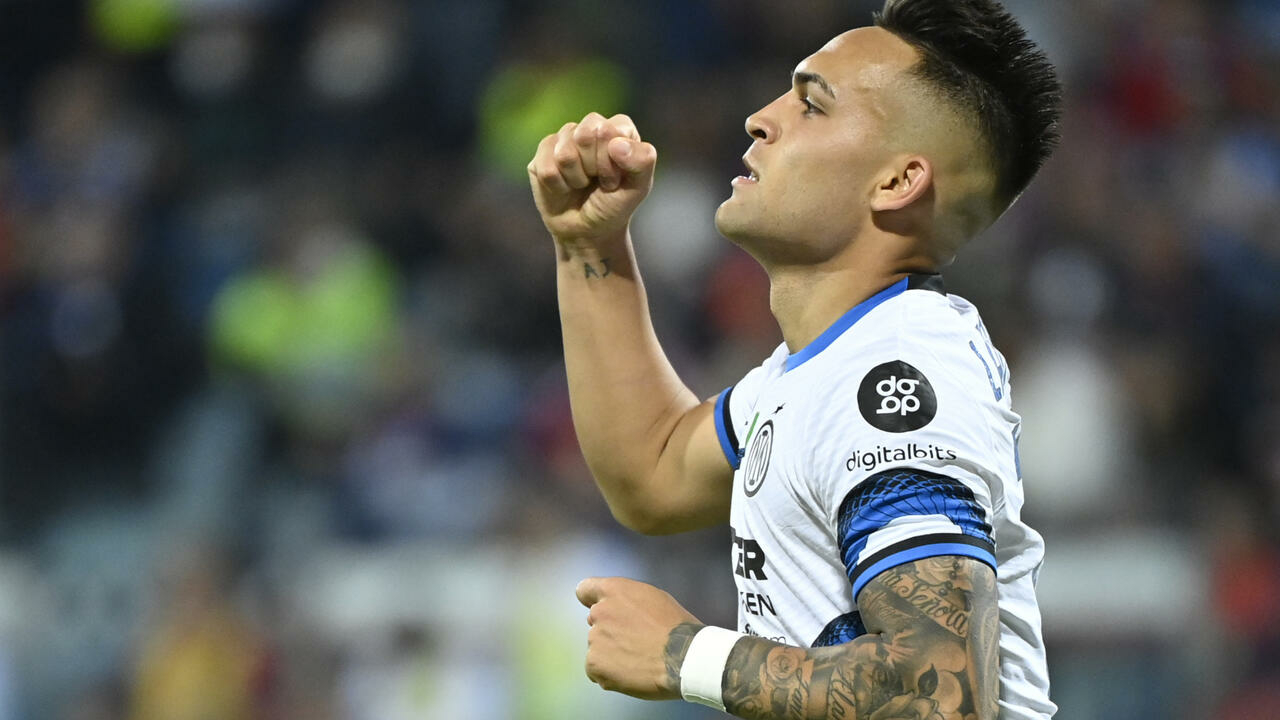 race will head into the final week of the season on Sunday with a brace in
Inter Milan's 3-1 win at Cagliari to stay two points behind leaders AC Milan.

Reigning champions Inter had to win to have any hope of retaining thir league
crown after Milan beat Atalanta 2-0 earlier in the day.

And goals in each half from Mattia Darmian's and Martinez ensured that Simone
Inzaghi's side would push their local rivals down to the wire with a hard-
fought victory in Sardinia.

Simone Inzaghi's Inter could have been tired after a thrilling, extra-time
Italian Cup triumph over old foes Juventus on Wednesday but came through a
tricky test against a side scrapping for their top flight lives.

"The emotions were on Wednesday, winning a trophy we cared about a great
deal," Inzaghi told DAZN.

"It wasn't easy after Milan's win, but the team played really well against an
opponent who is problematic on their own turf. I congratulate my lads,
because this was by no means to be taken for granted, especially after
playing 120 minutes on Wednesday."

They had already had a Milan Skriniar goal ruled out for handball when
Darmian did put the away side ahead, and once Martinez lashed home his first
six minutes after the break he thought that was that.

Charalampos Lykogiannis thumped home from distance almost straight afterwards
to give Cagliari hope of getting an unlikely result, but with six minutes
remaining Martinez dinked home his second to calm Inter nerves.

On the final day Inter host Sampdoria, who are now safe thanks to defeat for
18th-placed Cagliari, while Milan travel to Sassuolo needing just a point to
secure their first Scudetto since 2011.

Stefano Pioli's side have the better of the season's two Milan derbies
meaning that if the two teams finish level on points it will be Milan who
take the title.

They hold the advantage over Inter thanks to strikes from Rafael Leao and
Theo Hernandez which sealed their win over Atalanta in front of a packed San
Siro.

Leao broke through after 56 minutes, picking up a Messias through ball before
firing between the legs of Atalanta goalkeeper Juan Musso, with Hernandez
adding a second 19 minutes later following a brilliant solo run through the
Atalanta defence.

In Naples, Lorenzo Insigne scored on his final home game for Napoli, a 3-0
win over Genoa, who are now relegated to Serie B.

It was an emotional final match for Insigne at the Diego Maradona Stadium
after 12 years in his hometown club. The Napoli captain will join MLS club
Toronto FC as a free agent from July 1.

The 30-year-old was given a guard of honour as he walked out onto the pitch
for the final time alongside his sons and was presented with gifts.

Insigne scored Napoli's second goal from the penalty spot after an hour with
Victor Osimhen and Stanislav Lobotka also on target for the third-placed
southeners who return to Champions League football next season.