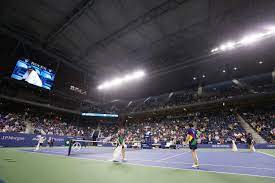 NEW YORK, Sept 2, 2021 (BSS/AFP) - In one of the US Open's most bizarre match stoppages, blowing wind and rain under the corners of the Louis Armstrong Stadium roof halted a men's second-round matchup on Wednesday.

Torrential rains, the remnants of deadly Hurricane Ida, were blown under the corners of the retractable roof at the facility, opened in 2018 to provide a second court to keeping playing despite downpours.

The storm eventually swamped Armstrong stadium, the court looking closer to hosting a 100-meter freestyle than a tennis match.

The US Tennis Association announced the completion of the match would be moved to Arthur Ashe Stadium.

Wind-blown rain forced a drying machine onto the court and a host of towel-wielding workers to try and soak up moisture from the rain-slickened court.

The first stoppage came at 5-5 in the first set, when the machine helped get the court back in condition.

The second stoppage came at 4-4 in a first-set tie-breaker and consisted mostly of wiping down the lines so play could continue.

When it resumed, Schwartzman won the first three points to win the set. Anderson led 30-15 serving in the first game of the second set when the decision was made to suspend the match.

The area was under a tornado warning and flash flood watch from the US National Weather Service during the deluge.