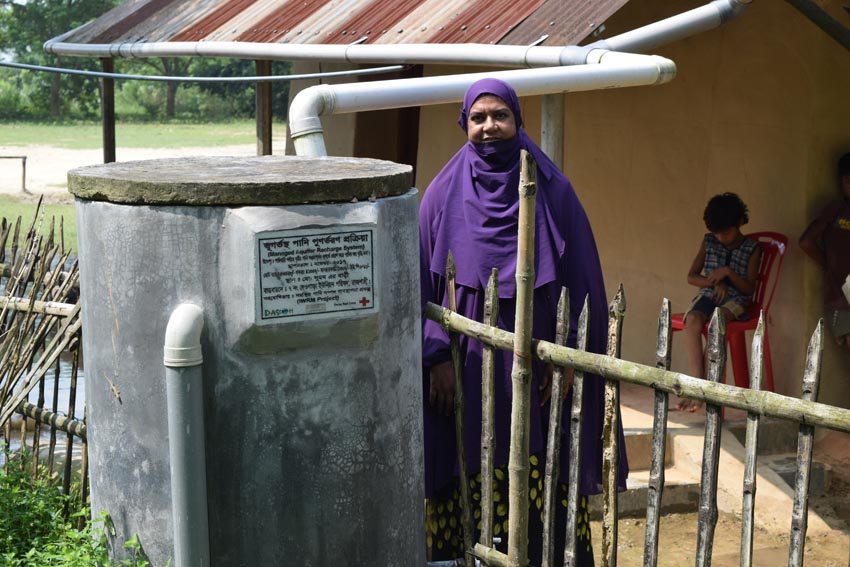 RAJSHAHI, Sept 4, 2021 (BSS) - Managed aquifer recharge (MAR) can enrich underground water in the drought-prone Barind area where two people has been pioneer in the process exploring the collecting and conserving system of rainwater.

Korneleus Tudu, 54, and Paulus Tudu, 48, of Barsapara village in Dewpara Union under Godagari Upazila in Rajshahi district, have been harvesting rainwater and inserting those to the underground for the last around four to five years.

They have arrangements of harvesting all the rainwater from the rooftop of their tin-shed house and later injecting those to the underground.

They are using the conserved water for household purposes through taps fixed in the lower part of the tank. Surplus water is being preserved in the recharge tank through another upper portion wide pipe.

Tudu said they had to suffer a lot due to the water crisis as there was no water in hand-driven tube-wells from March to June every year. But, the trouble started tiding over for promoting MAR, a modern technology of artificial aquifer recharge, at present.

Not only the two neighbours but also many other households, business establishments and local government institutions have installed the similar technology in the drought-hit area.

They are getting technical and financial assistance from the Integrated Water Resource Management (IWRM) Project for successful and effective promotion of MAR along with its operation.

MAR is being promoted in the high barind area to halt the gradually declining ground water level.

In the drought-prone area, people are now becoming more conscious to cease the alarming decline of the groundwater layer. Aquifer recharge activities are being done at household level side by side with various institutions and industries.

Shafiqul Islam, a farmer of Kadigram village under Kakonhat Pourasava in Godagari Upazila, has arranged aquifer recharge system in his house.

He is harvesting rainwater from around 3,000 square feet rooftop area of seven rooms through 4-inch diameter PVC pipe and conserving those in tanks constructed with one-foot height and three-feet diameter six concrete ring slabs.

"150 MAR in community level, 43 in local government institutions and four other in business establishments have, so far, been installed in the drought-affected areas," said Jahangir Alam Khan, Director of IWRM project.

Abdur Rashid, Chairman of Nachole Union Parishad in Chapainawabganj, said underground water level has started rising by dint of promoting the technology although it has been installed in limited scale.

He advocated for incorporating the MAR issue in the existing house building policy so that it can be mandatory in each of the houses to stop declining underground water.

The IWRM project is being implemented in drought-affected 39 union parishads and three pourasavas in eight upazilas of Rajshahi, Naogaon and Chapainawabganj districts.

DASCOH Foundation and Swiss Red Cross have jointly been implementing the project with financial support from the Swiss Agency for Development and Cooperation since 2015.

There are 32 heavy auto rice mills within a three square kilometers radius area at water-stressed Jhilim Union under Chapainawabgonj district. The mills extract huge underground water every day through 120 deep tube-wells. For this reason, the nearby tube-wells became non-functional.

So, the then Jhilim UP Chairman Tasiqul Islam had taken necessary initiative so that the entire auto rice mills can send their rooftop rainwater to ground water layer.

Responding to his call, Mukhlesur Rahman, owner of Jotsna Auto Rice Mill, has adopted the necessary step of aquifer recharge through injecting rainwater of his 60,000 square-feet rooftop area.

Tasiqul Islam had a farsighted plan of aquifer recharge through sending rainwater of 25 lakh squire-feet rooftop area of all 32 auto rice mills and he intended to materialize his dream.