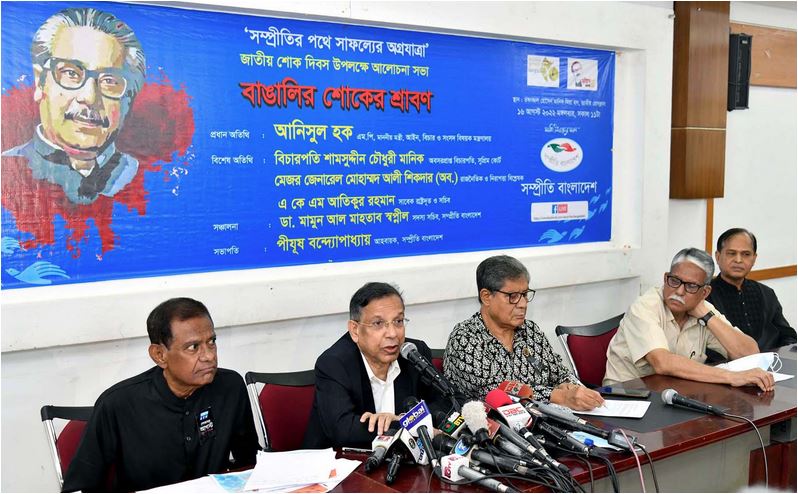 DHAKA, August 16, 2022 (BSS) - Law, Justice and Parliamentary Affairs
Minister Anisul Huq today said the work of a commission, to unearth behind
the scene plotters of August 15, 1975 carnage, would mostly be research
oriented.

"A framework has already been readied for forming the commission. But the
formation of the commission is being delayed firstly by Covid-19 outbreak,
then ongoing Russia-Ukraine conflict. What will be the number of members of
the commission, its aim and work are defined in the framework," he said.

The minister said this while addressing as the chief guest at a discussion
organised by Sampriti Bangladesh, a citizens' platform promoting secularism,
at National Press Club this afternoon.

Anisul said Prime Minister Sheikh Hasina is inextricably involved with the
formation of the commission and her opinion will be final here.

"It is impossible to publish the framework without consulting the matter with
her. Prime Minister may ask us for correction, refinement and amplification.
We would present before the public whatever she finalizes," he added.

Terming the murder of Father of the Nation Bangabandhu Sheikh Mujibur Rahman
was a preplanned and conspiratorial crime, the law minister, at the
discussion, said the killers knew it would be impossible to make Bangladesh a
failed state as long as even a drop of blood from Bangabandhu family remains
intact.

"Though Bangabandhu considered himself as an ordinary person, he was nowhere
near ordinary from national and international perspective. He had reached the
level of leading the deprived people of the whole world, subsequently
increasing the number of his enemies," Anisul further said.

The law minister said after the killing of the Father of the Nation
Bangabandhu Sheikh Mujibur Rahman, Ziaur Rahman started with making number
one Razakar Shah Azizur Rahman Prime Minister. Many members of his (Zia)
cabinet were the ministers of Aiyub Khan, he added.

"From all these, it is clear that the Ziaur Rahman started his rule after the
killing of Bangabandhu, by completely changing the legacy of War of
Liberation. They wanted to get rid of Bangladesh by killing Bangabandhu,"
Anisul Huq said.