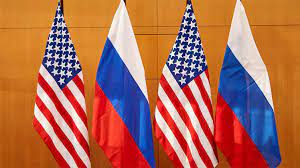 MOSCOW, Nov 29, 2022 (BSS/AFP) - Russia announced on Monday that it was postponing highly anticipated arms control talks with the United States, scheduled to take place in Egypt despite tensions over the Ukraine conflict.

"The session of the bilateral coordinating committee on the Russian-American START Treaty, previously scheduled to take place in Cairo between November 29 and December 6, will not take place on the dates indicated," a foreign ministry spokesperson told state-run news agency TASS.

"The event is postponed to a later date," the spokesperson was cited as saying.
No other details were provided.

The United States had said this month that it expected to meet with Russia soon to discuss the possible resumption of inspections under New START, a key nuclear disarmament treaty between the two countries.

Moscow announced in August that it was suspending US inspections of its military sites under New START, saying it was responding to American obstruction of inspections by Russia.

New START is the last bilateral agreement of its kind between the world's two main nuclear powers.
Signed in 2010, it limited the arsenals of the two countries to a maximum of 1,550 deployed strategic nuclear warheads each -- a reduction of nearly 30 percent from the previous limit set in 2002.

White House national security spokesman John Kirby said Moscow had given no reason for calling off the Cairo meeting, the first face-to-face talks scheduled since the Covid-19 pandemic put a halt to them.

"It's basically an opportunity for both sides to get together and talk about the technicalities, the formalities, the compliance mechanisms that are in place with respect to New START," he said.

"We haven't received a real solid answer from the Russians as to why they postponed this. We're going to be working through the embassy to try to figure out what happened here," he said.

"We would like to see it get back on the schedule as soon as possible," Kirby added.
"It's not just important for our two nations. It's important for the rest of the world," he said.