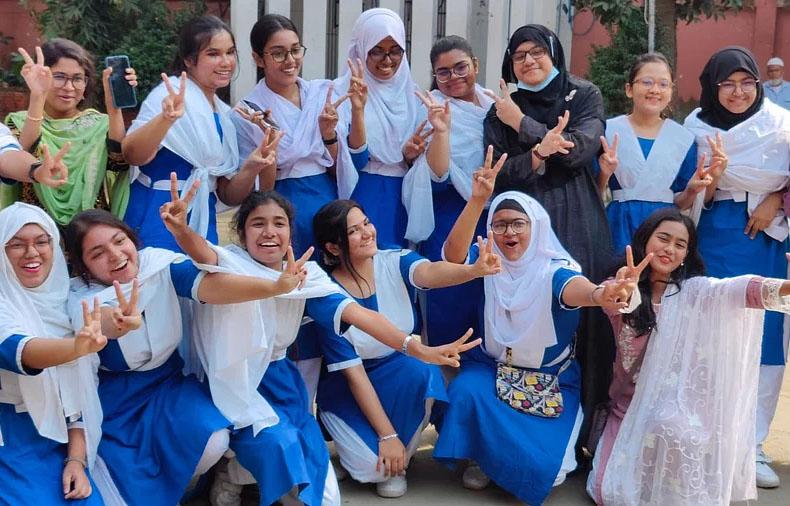 DHAKA, Nov 28, 2022 (BSS) - On an average 87.44 percent of the examinees passed the Secondary School Certificate (SSC) and equivalent examinations-2022 held under 11 education boards of the country.

"A total of 19,94,137 examinees appeared in the SSC and equivalent examinations this year. Of them, 17,43,619 students passed the examinations," Education Minister Dr Dipu Moni announced the results at a press briefing at International Mother Language Institute here.

A total of 2,69,602 students got the highest Grade Point Average (GPA-5) in the SSC and equivalent examinations which was1,83,340 last year, she added.

The education minister said various initiatives taken by the government which include distributing textbooks for free to students, broadcasting classes of experts in television, widespread use of technology as educational tool have significant contribution to the good results.

Besides, some special measures were also taken for the students of flood affected areas while some other measures including online classes, assignments and continuing regular classes were also taken to make up the overall learning loss due to Covid-19 pandemic, she added.

Responding to a question, she said the government will provide necessary supports to the institutions which have been enlisted in zero pass rates this year.

This year's SSC examination were delayed about seven months for the COVID-19 pandemic and the devastating floods that engulfed much of northeastern regions alongside several northern districts.

A total of 2,975 educational institutions achieved 100 percent pass rate in this year's SSC and equivalent examinations, while the number was 5,494 last year.

Meanwhile, students from 50 schools and madrasahs under five education boards out of 11 boards failed to come out successful in this year's SSC and equivalent examinations.

The number of schools and madrasahs with "zero results" was 18 last year.

The female students have outnumbered their male counterparts in terms of pass rate and GPA-5 in this year's SSC or equivalent examinations.