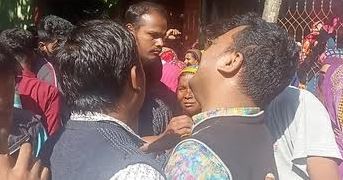 THAKURGAON, Nov 27, 2022 (BSS) - Three members of a family were killed as a passenger bus rammed their motorcycle in Baliadangi upazila of the district this morning.

The deceased were identified as Masudur Rahman, 55, his wife Rahima Begum, 45, and their daughter Mehernegar Simi, 14. They were the residents of Mothurapur village in Thakurgaon Sadar Upazila.

Local people said the accident occurred at around 10 am in Lakshmipur area as a bus of Hanif Paribahan hit the motorcycle, leaving Rahima Begum dead on the spot while Masudur Rahman and Mehernegar were declared dead at Thakurgaon Sadar Hospital.