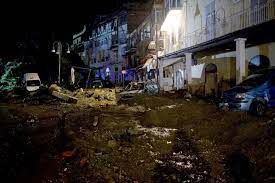 CASAMICCIOLA TERME, Italy, Nov 26, 2022 (BSS/AFP) - One woman died and around a dozen other people were still missing Saturday after heavy rains caused a landslide on the Italian island of Ischia, officials and emergency services said.

A wave of mud and debris swept through the small town of Casamicciola Terme in the early hours of Saturday morning, engulfing at least one house and sweeping cars down to the sea, media reports and emergency services said.

A woman's body was found by rescuers, while around a dozen or so people were unaccounted for by early Saturday evening, according to the prefect of Naples, Claudio Palomba.

He said however that some of those reported missing earlier were later found safe, including one family with a newborn baby.

"We are afraid that there might be other victims, but so far the current figure is one dead," Luca Cari, a spokesman for the fire service, told AFP.

The rescue effort was hampered by continued rain and high winds, which also delayed ferries bringing reinforcements from the mainland.

Interior Minister Matteo Piantedosi had earlier warned there were people trapped in the mud, saying it was a "very serious" situation.

However, he denied a statement by his colleague Matteo Salvini, the deputy prime minister and infrastructure minister, that eight people had died, saying this had not been confirmed.

The heavy rain sent torrents of mud through the streets of Casamicciola Terme, on the north of Ischia, a lush island located near Capri that is thronged with tourists in the summer months.

Trees were upturned and cars left battered on the side of the road or in the water, according to AFP journalists.

The fire service earlier said one house had been overwhelmed by the mud and that two people had been rescued from a car swept into the sea.

In the worst-affected area of Casamicciola Terme, at least 30 families were trapped in their homes without water or electricity, with mud and debris blocking the road, ANSA news agency reported.

Officials later said they expected to evacuate and find temporary homes for between 150 and 200 people by Saturday evening.

"The rescue effort remains complex due to the weather conditions," said the department for civil protection, but stressed teams would keep working through the night using headlights.

Local authorities called on residents of Ischia to stay inside so as not to hinder the rescue operation.

Prime Minister Giorgia Meloni offered her sympathy to those affected and called an extraordinary cabinet meeting for Sunday to discuss the crisis.

Casamicciola Terme was hit by an earthquake in 2017, in which two people died.
The devastation in Ischia came just weeks after 11 people died in heavy rain and flooding in central eastern Italy.