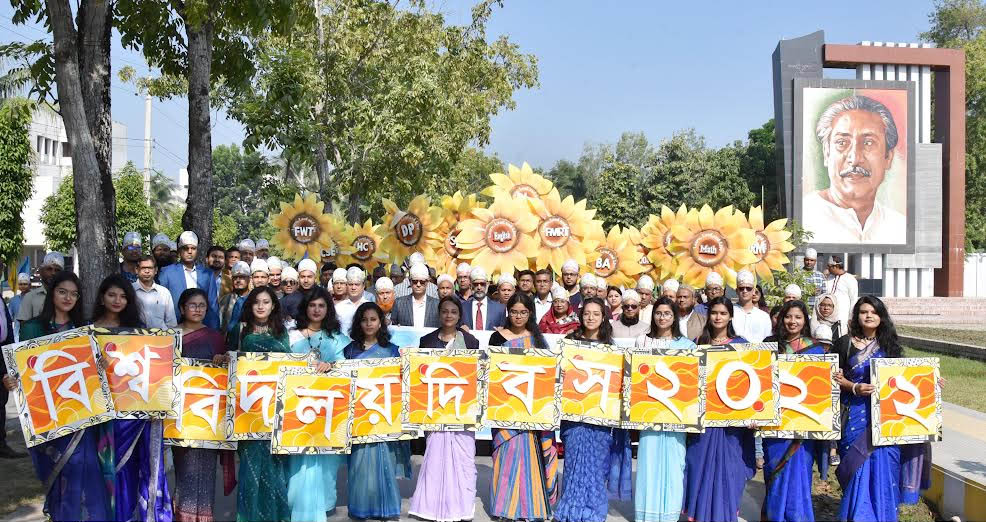 KU Vice-Chancellor Professor Dr Mahmud Hossain inaugurated the function as the chief guest this morning by releasing balloons and pigeons at the Shaheed Hadi Chattar (Square) this morning.

Later, teachers, students and employees of the university paid homage to the pavement of Shaheed Minar and 'Kaljoyee Mujib,' a memorial built in memory of Father of the Nation Bangabandhu Sheikh Mujibur Rahman.

A colourful procession led by VC Professor Dr Mahmud Hossain was brought out from Hadi Square that paraded around Shaheed Minar, Adommya Bangla and Katka Monument, a memorial built in the memory of KU students who drowned at Katka in the Bay of Bengal in 2004.

A discussion was held at Shaheed Tazuddin Ahmed administrative building with VC Professor Dr Mahmud Hossain's speech as the chief guest. Achievement and success in previous years and future plans of the university were presented by the keynote speaker.

Aiming for building the KU campus green and clean, the VC inaugurated the solid waste management project on the campus, adjacent to the medical centre, marking the day.

Besides, Shaheed Tazuddin Ahmed administrative building, the residence of the Vice-Chancellor, the cafeteria, roads and the main gate was decorated with colourful lights to mark the day.

KU started its academic activities formally on November 25 in 1991 with four disciplines under two schools with only 80 students and 30 teachers with Prof Dr Golam Rahman as the founder Vice-Chancellor (VC), said Atiar Rahman, Acting Director of Public Relations and Publication Division of KU.

Now it has over 7,000 students, 500 teachers and around 600 officers and employees in 29 disciplines under eight schools in addition to two institutes.

Besides, over 13,000 students have completed graduation from the university in the last decades, the press release said.