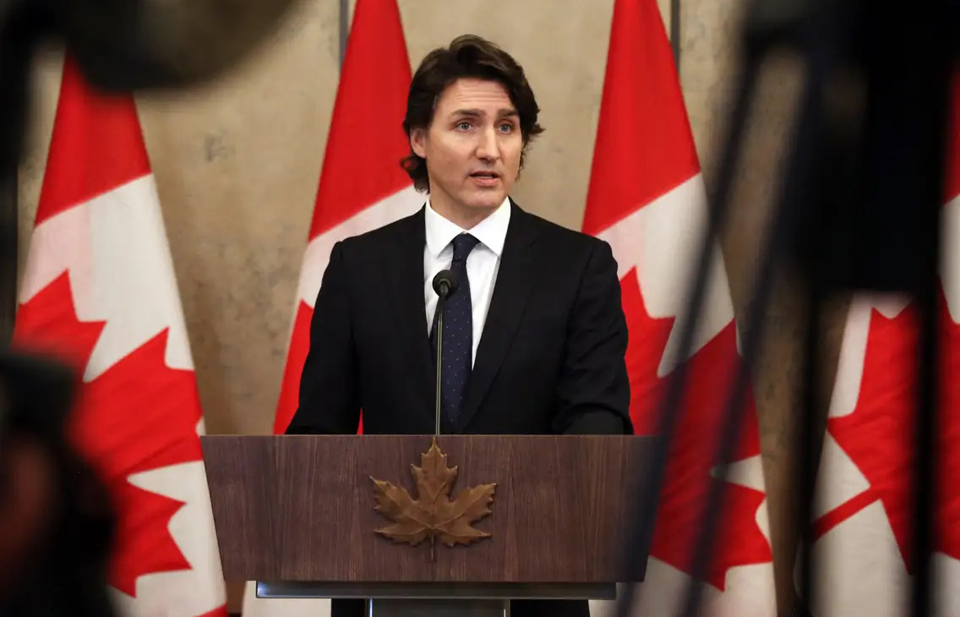 OTTAWA, Nov 25, 2022 (BSS/AFP) - Prime Minister Justin Trudeau will testify at a public inquiry on Friday in defense of Canada's use of wartime measures to dislodge protestors whose presence had paralyzed the capital earlier this year.

The Public Order Emergency Commission will hear Trudeau's statement about the rarely used powers, which were invoked in February after weeks of trucker-led protests that brought Ottawa to a standstill and disrupted trade.

A self-styled "Freedom Convoy" of truckers rolled into the capital from across Canada to express their anger at Covid vaccine mandates.

As solidarity rallies popped up -- blocking trade corridors including a bridge to Detroit that is the busiest international crossing in North America -- their demands expanded to a broader rejection of pandemic restrictions and an anti-establishment agenda.

Trudeau said at the time that police needed "more tools to restore order" after more than three weeks of "dangerous and unlawful activities," including harassment of Ottawa residents.

He pointed to "evidence of increased ideologically motivated violent extremism activity across the country" and alleged that the protestors had received "foreign funding to destabilize Canada's democracy."

But the use of the Emergencies Act to remove the noisy, street-jamming protests and blockades was criticized as overreach by political opponents and civil liberties groups.

"It was a tinder box waiting to explode. It was not a family festival," former Ottawa police chief Peter Sloly testified.

He resigned during the crisis over what the commission heard was a disorganized police response, including intelligence failures and leaks -- both now under investigation.

"It was too cold and it was too much. But they did their very best," said Sloly.

Convoy organizers painted a much different picture, calling their actions legitimate pushback against "evil" policies and describing a festive atmosphere in front of Parliament with hot tubs, bouncy castles and barbecues.

"We weren't there to disrupt the city residents," trucker Brigitte Belton told the inquiry. "We were there to be heard."

Evidence presented at the commission, however, showed organizers did want to tamp down on incendiary comments and extremist elements of the protest that included calls for a coup and the spread of conspiracy theories.

Text messages between officials, and readouts of calls with bankers and the White House in Washington showed frustrations rising as Ottawa and the provinces struggled to bring the protest movement to heel.

"I had one investor say, 'I won't invest another red cent in your banana republic,'" Freeland recalled of a conversation with a banker.

He also expressed exasperation over an inability to secure tow trucks to clear a blockade along his province's border with Montana.

At one point during the protests, two ministers bantered in an exchange of messages about bringing in the army.

"How many tanks are you asking for," said Public Safety Minister Marco Mendicino, to which Justice Minister David Lametti replied: "I reckon one will do!!"

Trudeau would later tell reporters that deploying the military was "not in the cards."

At the inquiry, Trudeau's national security adviser Jody Thomas testified that she recommended invoking the Emergencies Act as the protests were "causing significant economic instability. The violent rhetoric was increasing rapidly and exponentially, (and) the number of threats against public figures was increasing."

Those included threats against Freeland, saying she would "get a bullet to the head" for "lying about Covid-19."

And Mendicino testified he was warned about "a hardened cell of individuals" in the Alberta border town of Coutts "armed to the teeth with lethal firearms, who possessed a willingness to go down with the cause."

A cache of guns was seized and four people in Coutts were charged with conspiring to murder police officers.