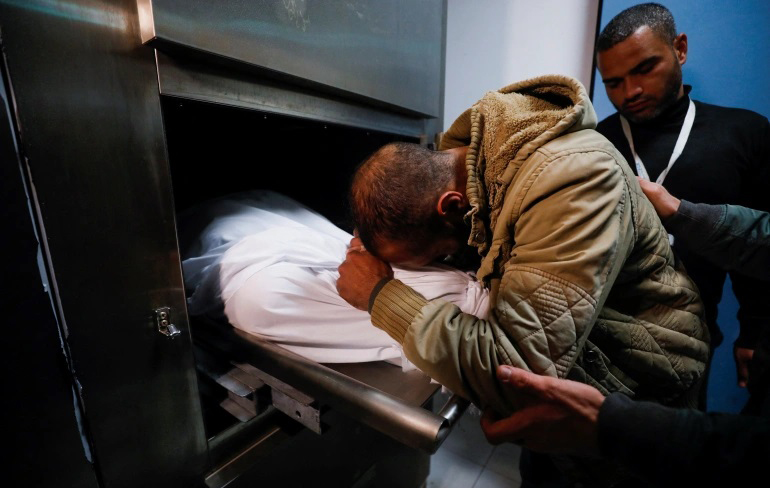 NABLUS, Palestinian Territories, Nov 23, 2022 (BSS/AFP) - The body of an Israeli killed in a car accident was "taken" by Palestinian militants from a West Bank Hospital Tuesday, officials said, as a teenager was killed in clashes between the army and militants.

The Israeli army said the body of an 18-year-old Israeli-Druze who died in a "serious road accident" in the West Bank was "taken" from a hospital in Jenin, a stronghold of Palestinian militant factions in the north of the occupied West Bank.

Local sources told AFP the body was in the hands of an armed group.

Abductions of Israelis, dead or alive, have been used in the past as bargaining chips by armed Palestinian groups to secure the release of prisoners and the return of the bodies of Palestinians killed in clashes by Israel.

In the major West Bank city of Nablus, 16-year-old Ahmed Amjad Shehadeh died after "a bullet penetrated his heart fired at him by Israeli occupation soldiers during the storming of the city", the Palestinian health ministry said in a statement.

A further statement said that one other Palestinian was in a "critical" condition, while three others were being treated in hospital.

Witnesses in Nablus reported fighting throughout the night in the city, where a nascent militant group called "The Lions' Den" has emerged in recent months.

The Al-Aqsa Martyrs' Brigades, the armed wing of Palestinian president Mahmud Abbas's secular Fatah movement, said in a statement that some of its fighters had been involved in the clashes.

The Israeli army confirmed to AFP it was "operating in the city of Nablus to secure the entrance of Israeli civilians to Joseph's Tomb".

"Armed suspects in the area are shooting live fire at the forces. The forces are responding with live fire," the statement added.

The clashes occurred as the army escorted pilgrims to the tomb, a flashpoint for West Bank violence, believed to be the last resting place of the biblical patriarch Joseph.

The Palestinian office of religious sites considers Joseph's Tomb to be an Islamic archaeological monument.

Israel's army organises monthly escorted pilgrimages to the site, and prohibits civilians entering on their own.

Violence has flared this year in the West Bank, where the Israeli army has launched near-daily raids since a series of attacks in Israel that killed several civilians.

The United Nations says more than 125 Palestinians have been killed this year across the West Bank.

Israel has occupied the territory since the 1967 Six-Day War.