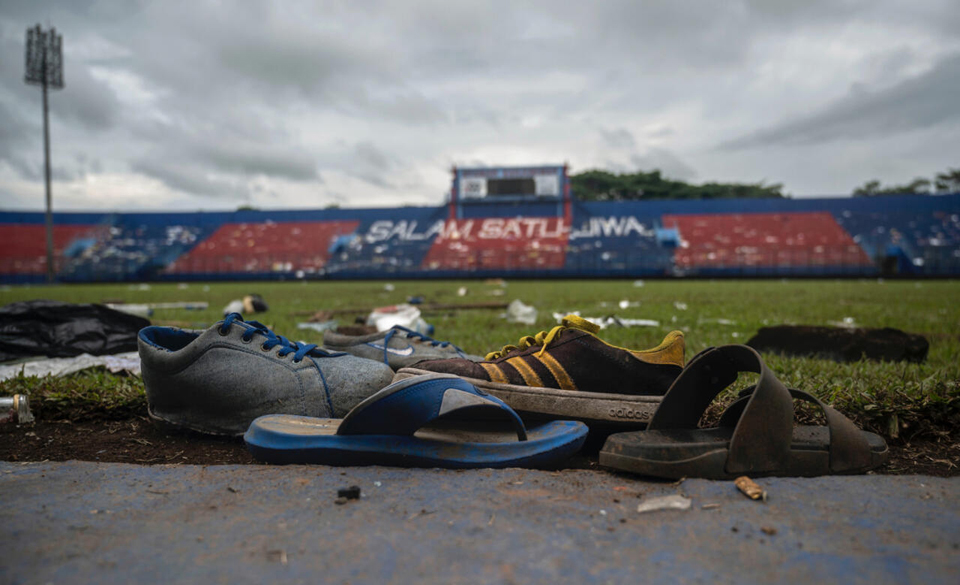 MALANG, Indonesia, Oct 4, 2022 (BSS/AFP) - Elite Indonesian police officers
were under investigation Tuesday over a stadium stampede that killed 125
people including dozens of children in one of the deadliest disasters in
football history.

As public anger grew over the tragedy, police moved to punish those
responsible for the crush in the city of Malang that witnesses say started
when officers fired tear gas into packed stands to quell a pitch invasion.

Arema FC fans set up a makeshift centre in Malang Monday to receive legal
complaints, saying they would file a lawsuit against officers for causing
what they said were scores of deaths by indiscriminately targeting spectators
in confined terraces.

Police described the incident as a riot and said two officers were killed,
but survivors accuse them of overreacting.

"If there was a riot, it (the tear gas) should be fired to the pitch, not in
the stand," Danny Agung Prasetyo, supporter group Arema DC's coordinator told
AFP.

"Many of the victims were those who were in the stand. They were panicking
because of the tear gas."

The local police chief was replaced Monday, nine officers were suspended and
19 others were put under investigation over the disaster that struck the
stadium filled with only hometown Arema FC fans, national police spokesman
Dedi Prasetyo said.

The Indonesian government suspended the country's national league and
announced a task force to investigate the tragedy. It said the probe would
take two to three weeks to complete.

The terraces of the Kanjuruhan stadium were packed with thousands of young
"Aremania", or Arema FC fans, to watch their team face fierce rivals
Persebaya Surabaya.

But after a 3-2 defeat, the first at home for more than two decades to their
adversaries from East Java's biggest city, fans streamed down to the pitch to
speak to players and management.

Police responded to the pitch invasion with force by kicking and hitting fans
with batons, according to witnesses and video footage, prompting more fans to
join the crowd on the pitch.

Calls for an independent investigation have grown since details of the
stampede started to emerge over the weekend.

"We will find out what really happened, about the violence and the excessive
use of force," Choirul Anam, a commissioner of the National Commission of
Human Rights (Komnas HAM), told a press briefing Monday.

"Why would you kick someone who was just walking on the side of the field?"

Fan anger was displayed at the stadium where a police truck was torched and
the walls were daubed with graffiti that read "Tear gas vs mother's tears"
and "Our friends died here".

More vigils were planned in Malang on Tuesday after fans and Arema FC players
gathered outside the stadium a day before to lay flowers at the scene and
pray for the victims.

Among the dead were 32 children, an official at the women's empowerment and
child protection ministry told AFP, adding that the youngest was a toddler
aged just three or four.

Indonesia's health ministry said all the victims of the stampede have now
been identified.

Of the hundreds injured, 68 were severely wounded and 219 suffered moderate
injuries.

Football fan violence is an enduring problem in Indonesia, and Persebaya
Surabaya fans had been barred from the game because of it.

But fans said they were not to blame.

Indonesian officials said more tickets had been allocated than should have
been, while some of the stadium's doors appeared to have been shut, according
to witnesses.

That left physically stronger supporters to scale large fences in order to
escape the mayhem while the most vulnerable were at the mercy of the crush as
tear gas rained down.

"The doors were closed, that's why people were pushing. Some lay down in the
corner" by a closed gate to try to escape the crush, a 16-year-old survivor
of the chaos told AFP.

"In the stand, there were some people who got hit directly. I saw it myself,"
he said.

Everything that could go wrong at a football match, appeared to do so on
Saturday night, culminating in a disaster never seen before in an Indonesian
stadium.

"You could see and sense that something bad could potentially happen. That's
the kind of fear you usually get when you travel to a game here," Indonesian
football pundit Pangeran Siahaan told AFP.

"There's a lot of dangers every time you go into a football stadium in
Indonesia."