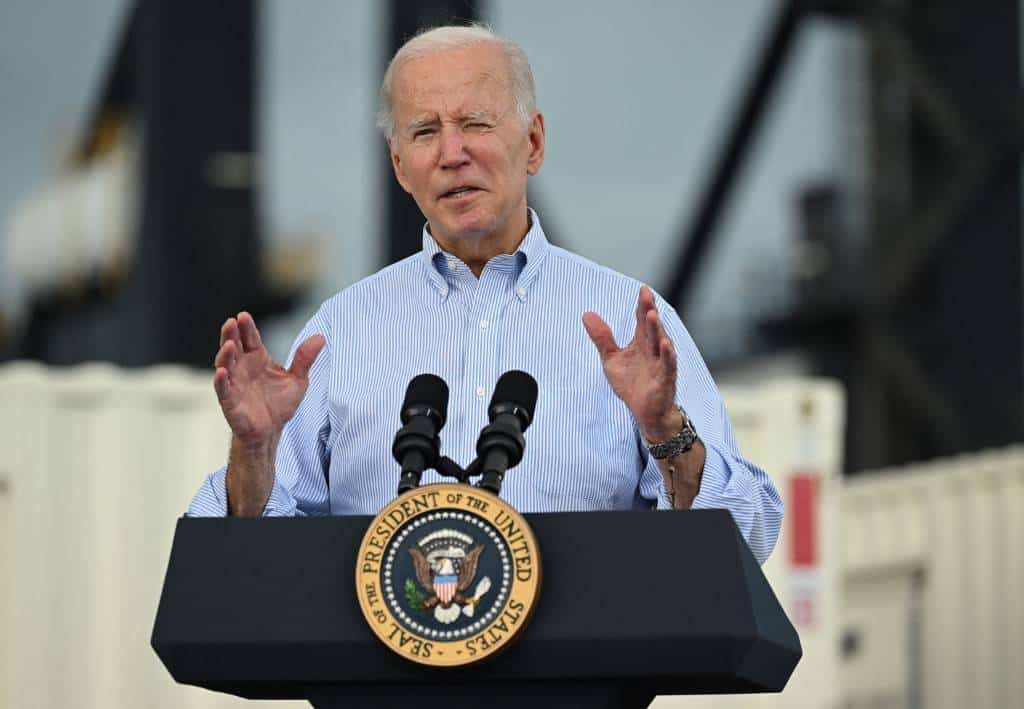 The president and First Lady Jill Biden -- who on Wednesday will also visit the devastation caused by Hurricane Ian in Florida where dozens have died -- headed to Ponce, on the south coast of Puerto Rico, pounded by Hurricane Fiona last month.

"We came here in person to show we're with you -- all of America's with you," he said in televised remarks. "I am committed to this island."

Press Secretary Karine Jean-Pierre described Ponce as "the hardest hit area of Puerto Rico" and "an area where people have lost almost everything."

More than two weeks after Hurricane Fiona passed over, thousands of people on the island, which is American but not a state, remain without power. Officials said at least seven percent of customers are still without electricity and five percent without water.

Biden announced $60 million to strengthen storm defenses, including flood barricades and warning systems -- all on top of hundreds of millions of dollars in new budgeting made possible by the huge infrastructure spending bill passed by the Democratic-led Congress last year.

To Puerto Ricans skeptical of the sometimes distant federal government, Biden insisted: "We're going to make sure you get every single dollar promised."

Not everyone on the ground was buying the pitch.

"I've not been interested in watching the news or following the president's visit," said retiree Nixa Sanabria, 66, from Catano in the north.

"It's the usual political talk to sell the idea to folks that we'll be given this or that -- and then nothing happens."

But the visit was part of a message from the Biden administration that the government is taking responsibility, in contrast to Donald Trump, who publicly fought with the island's leadership and even suggested in 2018 that death tolls from hurricanes were manipulated to make him look "bad."

Biden's stop in Puerto Rico came five years to the day that Trump stopped by in the wake of the especially destructive 2017 Hurricane Maria.

In a quickly viral moment, Trump shocked local people by jovially tossing rolls of paper towels, basketball style, into a crowd of residents whose lives had been turned upside down by flooding and damage.

The mayor of the capital San Juan at the time called Trump's behavior "abominable."

Departing for Puerto Rico, Biden told reporters that the island hadn't "been taken very good care of" in the past. And in Ponce, he insisted things were now different.

"Times like these, our nation comes together, (we) put aside political differences and get to work. We show up," Biden said.

Deanne Criswell, administrator of the Federal Emergency Management Agency, said that mayors on the island she had spoken to "finally feel like this administration cares for them."

The annual hurricanes often cut a ruinous path from the Caribbean up over Puerto Rico and Cuba or the Bahamas before hitting the US east or southern coasts.

Florida officials said the latest death count from Hurricane Ian was now at least 68 while another four deaths have been recorded in North Carolina.

The vast majority of those deaths occurred in Lee County on Florida's west coast, where the storm roared ashore with devastating force and where questions are being raised about whether authorities there ordered evacuations early enough.

In Puerto Rico, 25 deaths have been linked to Hurricane Fiona, according to the island's public health department, which is still investigating how 12 of the fatalities occurred.

The entire US territory lost power and about one million people were left temporarily without drinking water, when Fiona -- then a Category 1 storm -- hammered the island in mid-September.

Biden quickly declared a state of emergency, freeing up federal funds and expertise.

Island residents have complained of being ignored by Washington after previous disasters, including the hit from twin hurricanes, Irma and Maria, in 2017.

US authorities -- federal, state and local -- are often judged by the effectiveness of their response to such disasters.