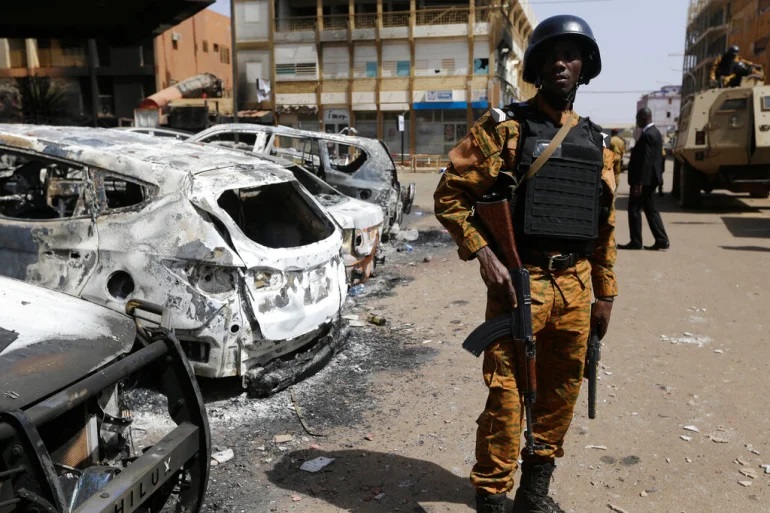 Violence has raged in the landlocked west African country after Lieutenant-Colonel Paul-Henri Sandaogo Damiba seized power in a January coup, ousting Burkina's elected leader and promising to rein in jihadists.

As in neighbouring countries, insurgents affiliated with Al-Qaeda and the Islamic State group have stoked the unrest, even after Damiba earlier this month sacked his defence minister and assumed the role himself.

"A convoy carrying supplies to Djibo town was the target of a cowardly and barbaric attack," government spokesman Lionel Bilgo said.

"The provisional toll is that 11 bodies of soldiers have been found... About 50 civilians are missing and searches are ongoing."

A security source told AFP the toll could be as high as 60 dead.

The convoy was ambushed Monday near Gaskinde in the province of Soum, part of the Sahel region.

Such convoys, escorted by the army, carry essential goods to towns in the north, particularly Djibo, which are under blockade by jihadists who have dynamited bridges on main roads.

On Sunday an improvised explosive device that targeted another army-escorted resupply convoy in the Sahel wounded four people, security sources said, but the convoy was able to reach its destination on Monday.

In early September an IED strike on a convoy left at least 35 civilians dead, the governor of the Sahel region said at the time.

More than 40 percent of Burkina Faso, a former French colony, is outside government control.

Thousands have died and about two million have been displaced by the fighting since 2015 when the insurgency spread into Burkina Faso.

Much of the Sahel region is now battling the insurgency, which also spread to Niger. In recent years, the violence has begun to spill over into coastal states Ivory Coast and Togo.

"The deteriorating security situation in Burkina Faso and Mali has made the north of the coastal countries the new front line against armed groups operating in the Sahel," the Konrad Adenauer Foundation, a German think tank, said in a report in April.

French forces supported Mali against insurgents for nearly a decade, but President Emmanuel Macron decided to pull out after France and the Malian junta fell out in the wake of a military takeover. The last French troops from France's operation Barkhane left last month.