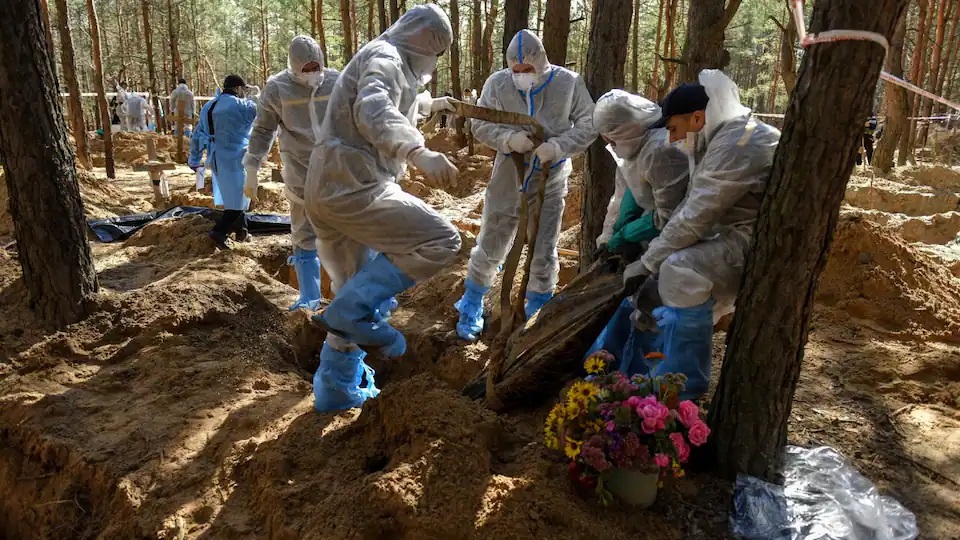 KYIV, Ukraine, Sept 24, 2022 (BSS/AFP) - Ukrainian officials in the eastern Kharkiv region said Friday that 447 bodies had been exhumed from a mass burial site near the eastern city of Izyum recaptured from Russian forces.

"In Izyum, the exhumation of all bodies at the mass burial site has been completed," Kharkiv regional prosecutors said on social media.

"During September 16-23, 447 bodies of the dead were exhumed from the site," they said in a Facebook statement.

The prosecutors added that 425 bodies of civilians, including five children, and 22 bodies of Ukrainian servicemen were among them.

They said that all necessary measures would be taken "to establish the circumstances of the deaths and punish the Russian military".

"Most of them have signs of violent death, and 30 have signs of torture. There are bodies with rope around their necks, with their hands tied, with broken limbs and gunshot wounds," he said in a statement on social media.

Ukraine recaptured Izyum and other towns in the east this month, crippling Kremlin supply routes and bringing fresh claims of Russian atrocities with the discovery of hundreds of graves -- some containing multiple bodies.

"Several men have had their genitals amputated. All this is evidence of the terrible torture to which the invaders subjected the inhabitants of Izyum," Synegubov added.

The Kremlin has denied its forces were responsible for large-scale killings in east Ukraine and accused Kyiv of fabricating its discoveries of mass graves in recaptured territory.