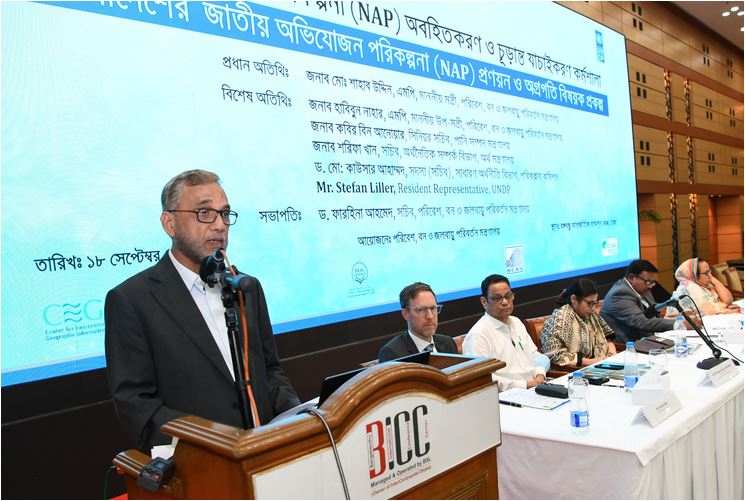 “Proper strategies have been identified…this plan is not only a national report, but it will also highlight our position in the world of climate adaptation,” he said.

The minister was addressing the final validation workshop on NAP organised at Bangabandhu International Conference Centre (BICC) here by the Ministry of Environment, Forest and Climate Change.

He said to combat climate change impacts, more emphasis should be given on increasing adaptive capabilities in climate vulnerable areas.

He said adaptation activities will be implemented under the national adaptation plans through the combined efforts of various ministries and organisations concerned aiming to ensure climate development in Bangladesh.

Speaking at the meeting, Environment, Forest and Climate Change Secretary Dr Farhina Ahmed said if the NAP is implemented, about 1.1 million hectares of arable land will be protected from storm surge and floods, tidal surge and salinity.

She said 10.3 million tonnes of rice will be produced annually and the per capita nutrition from cattle and fisheries will increase.

Infrastructural protection will be ensured from frequent climate disasters while about 30 million urban people will be benefited by the development of drainage management and 10 percent of the transportation cost will reduce, Farhina said.

She said 15 percent expenses will reduce in the treatment of mosquito-borne and waterborne diseases, and the income of the marginalised urban population will increase by 30 percent.

The NAP was presented by CEGIS Executive Director Malik Fida A Khan.