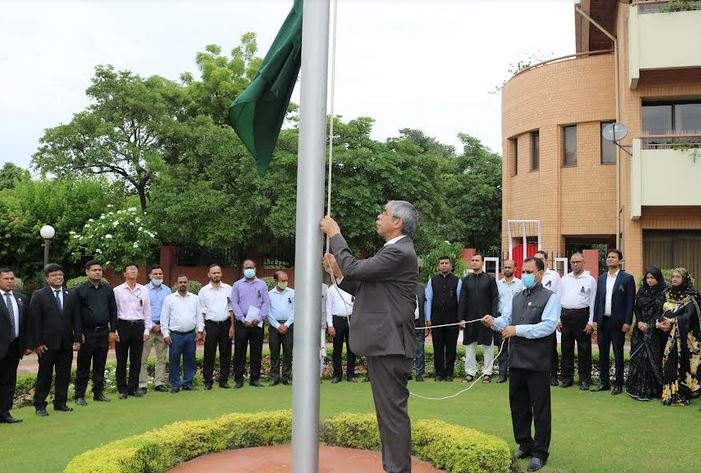 On this day in 1975, Bangabandhu, the Greatest Bengali of all Times, along with most of his family members was brutally assassinated by some disgruntled army personnel.

The day's programs began with hoisting of National Flag half-mast at the Chancery premises. Bangladesh High Commissioner to India Muhammmad Imran hoisted the flag in the morning when National Anthem was played.

Later, the envoy flanked by the mission officials and staff paid tribute to Bangabandhu by placing floral wreaths at his portrait. After placing the wreath, he stood solemn silence for some time.

Bangladesh Sangbad Sangstha (BSS) New Delhi Bureau Chief and Bangladesh Biman officials stationed in the Indian capital also placed wreaths separately on behalf of their respective organisations at the portrait of Bangabandhu to pay homage to the great leader.

He also mentioned the struggle and life of Bangabandhu from his student life and how he (Bangabandhu) led the Bengali nation towards achieving independence and urged the new generation to learn from the life of the great leader, who sacrificed his life for the betterment of the toiling masses.

Later, a munajat was offered seeking diving blessings for the departed souls of Bangabandhu and the martyrs of August 15, 1975 and peace, progress and prosperity of Bangladesh.

A documentary on Bangabandhu Sheikh Mujibur Rahman was screened on the occasion. A special publication published by the mission on the occasion was released.