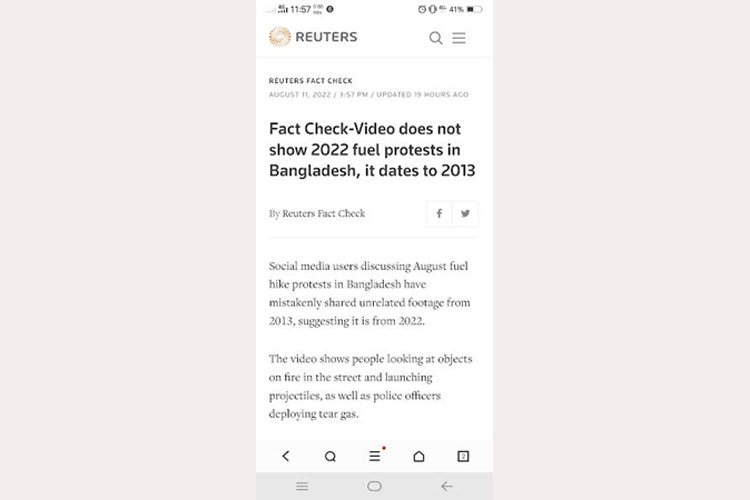 It said the video shows people looking at objects on fire in the street and
launching projectiles, as well as police officers deploying tear gas.

"Bangladesh... protests and hard clashes have erupted in several cities after
the government has decided to increase petrol prices by 51 percent and diesel
by 42 percent effective midnight... Huge lines are reported at petrol
stations all over Bangladesh," wrote one Twitter user who shared the video on
August 7.

Another iteration on Facebook includes the caption: "BANGLADESH... protests
and hard clashes have erupted in several cities after the government has
decided to increase PETROL & DIESEL prices ..."

Bangladesh raised fuel prices by around 50 percent on August 6, a move that
will trim the country's subsidy burden, the article said.

Referring to a statement of the Power, Energy and Mineral Resources Ministry,
it added that the South Asian country's US$416 billion economy has been one
of the fastest growing in the world for years. Due to the Russia-Ukraine war,
price for petrol was increased by 51.2 percent to Taka 130 (US$1.38) per
litre, 95-octane gasoline by 51.7 percent to Taka 135 and diesel and kerosene
by 42.5 percent.

According to local media, people have indeed been protesting against the
hike. However, a reverse image search shows that the video is not related to
the 2022 demonstrations.

The video can be traced back to May 2013 and shows movement of hardline
Islamists group Hefajat-e-Islam of that period.

The Twit and miscaptioned videos were also embedded with the Reuters article.