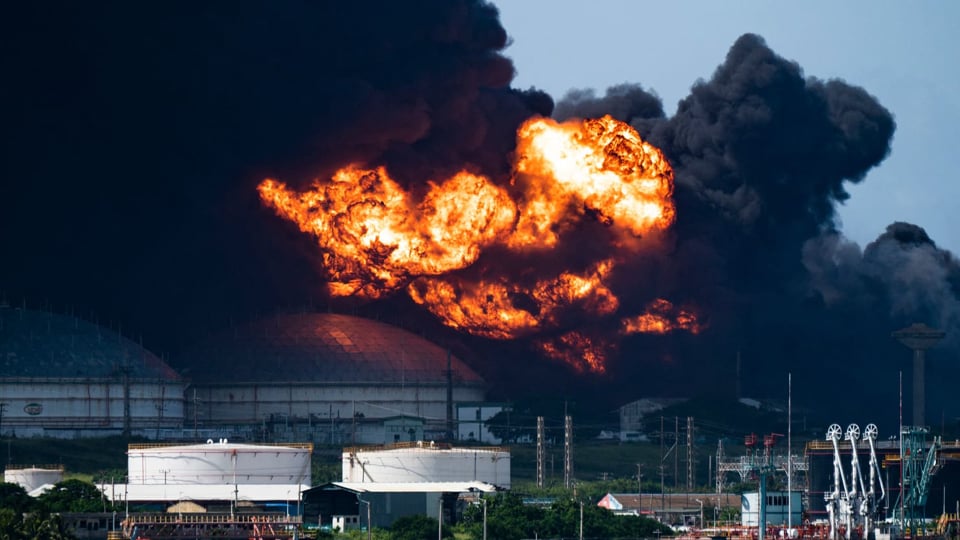 MATANZAS, Cuba, Aug 10, 2022 (BSS/AFP) - Helicopters and firefighters battled Tuesday to contain a days-old blaze at a fuel depot in Cuba that has already destroyed four tanks and was threatening four more.

The fire, which started on Friday after lightning struck one of the tanks, left a 60-year-old firefighter dead and 14 colleagues missing, according to authorities.

More than 100 people were reported injured, with 22 still hospitalized.

About 5,000 people have been evacuated from around the disaster zone on the outskirts of Matanzas, an industrial city of 140,000 people some 100 kilometers (60 miles) west of Havana.

As teams prepared Tuesday to try and douse the fire with foam, fears were rising that the blaze could threaten the fuel supply to thermoelectric plants at a time Cuba is already battling electricity outages.

"The firefighting teams continue to clear a path to the flames so the teams charged with applying the foam can get to the place," Matanzas governor Mario Sabines said on Twitter.

He added that smoke from the fire had reduced visibility to near zero, and drones were deployed to provide a better view.

Four of the eight tanks on site have already collapsed in the blaze, have spilled their contents, and were still burning, according to deputy fire chief Alexander Avalos Jorge.

Water was being sprayed on the remaining four tanks, clustered just 150 meters (about 492 feet) from the other four tanks, in a bid to keep them cool.

The tanks each have a capacity of some 50,000 cubic meters or 50 million liters of fuel.

The Matanzas depot, built in the 1980s and modernized several times, supplies the Antonio Guiteras thermoelectric plant, the largest in the communist nation.

The big question now is "the supply of fuel to thermoelectric plants," said Jorge Pinon, a Cuban expert in energy policy at the University of Texas.

"The problem with (electricity generation) has not been the lack of fuel, but the plants are very old and have maintenance problems. Now they will also have a lack of fuel," he said.

"If they lose Matanzas, they lose the ability to supply the power plants," said Pinon.

The disaster comes at a time when the island -- with an outdated energy network and persistent fuel shortages -- has faced mounting difficulties in meeting energy demands.

Since May, authorities have imposed energy blackouts of up to 12 hours a day in some regions -- sparking protests around the nation of 11 million people.

And Cuba's deputy foreign minister, Carlos Fernandez de Cossio, thanked the United States -- which has maintained six decades of sanctions against the communist nation -- for an offer of "technical advice."