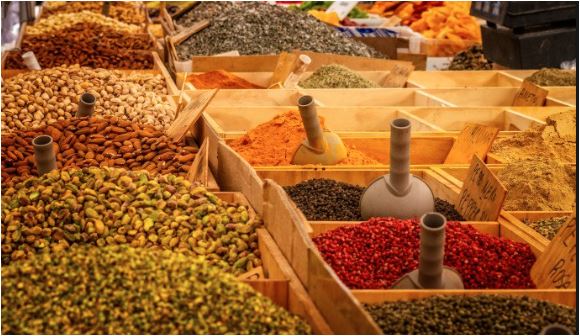 DHAKA,July 5,2022 (BSS) – Price of most of the spices except ginger, onion, red chilli and turmeric found remain stable at city’s different kitchen markets as no further spices price hike happened in the kitchen market marking the ensuing Eid-ul Azha scheduled to be held in next week.

Although retail price of certain spice items like ginger, onion, red chilli and turmeric found upward this week but both the retailers and wholesalers however claimed that there is no chance of further price hike of spice items on the occasion of the holy Eid.

The wholesale price of ginger on Tuesday found selling at Taka 65, per kg, up from Taka 60,per kg,  a day before, and selling at Taka 90-100, at retail  level, said M Manir Hossain, a retailer of Shah Srimiti Market at Mirpur section-1.

At  city’s Kawranbazar market, the price of onion found selling at Taka 48-50, a kg instead of Taka 40-45, a week ago. An Indian variety of red chilli which is most popular among the consumers selling at Taka 350, per kg, upward from Taka 240-250, was sold two and half months ago, due to heavy downpour in India.

But the local variety red chilli now being sold at Taka 240-250,per kg, registering  rise from Taka 160, per kg during this time.

In last one month, the  unit price of local onion and the imported one has increased respectively by 26.67 and 4.50 percent  while local  and imported red chilli by 14.58 and 11.95 percent ,according to statistics compiled by the state owned Trading Corporation of Bangladesh(TCB).

But the price of coriander, cumin, black pepper, cinnamon, cardamom and garlic remains stable for the last two months since Eid-ul Fitr on May, this year.

“The price of hot spices are declining over the day as the country has huge supply,” said Amar Kanti Das, a wholesaler of Khatunganj, Chattogram.

Besides, the price of per liter soyabean oil now selling at Taka 188 and a 5-liter container at Taka 980 found at city market as the retailers claim that the price likely to afresh decline in coming days .

Regarding edible oil price, Haji  Mohammad Golam Mawla, general secretary of Bangladesh Paikary Vojjayatel Babosayee Samity, told BSS that if the government didn’t fixed the oil price then it is likely to decline over the time, adding that “if the new consignment arrives then the price is likely to decline.”