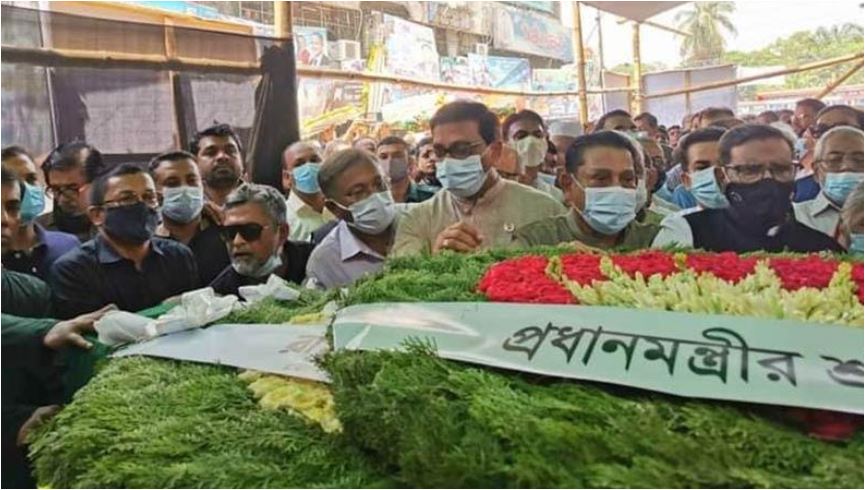 DHAKA, July 4, 2022 (BSS) - Leaders and activists of the Awami League (AL)
today paid homage to AL Advisory Council member Mukul Bose, who died at a
hospital in Chennai of India on July 2 last.

The body of Mukul Bose was brought here from Chennai, India on a special
flight of US-Bangla Airlines yesterday.

The body was taken to the AL central office on Bangabandhu Avenue in the
capital around 10:30 am today, where the leaders and workers of the party led
by AL General Secretary Obaidul Quader paid homage by placing wreaths on the
coffin of Bose.

His coffin was kept on a makeshift stage in front of the party office where a
guard of honour was given to the heroic freedom fighter.

Later, Obaidul Quader, also the road transport and bridges minister, paid
tribute to his coffin by placing a wreath on behalf of Prime Minister Sheikh
Hasina.

Following this, flanked by the leaders of AL, Quader again paid homage to
Bose on behalf of the AL.

Apart from this, leaders of other organizations including Dhaka City North
and South units of AL, Jubo League, Swechchhasebak League, Krishak League,
Chhatra League and Jubo Mohila League also paid homage to Bose by placing
wreaths separately at his coffin.

Along with Obaidul Quader and Syed Ashraful Islam, Bose was also the joint
general secretary of the Awami League during the state of emergency in 2007.

He was elected as the party's Advisory Council member on January 1, 2017.