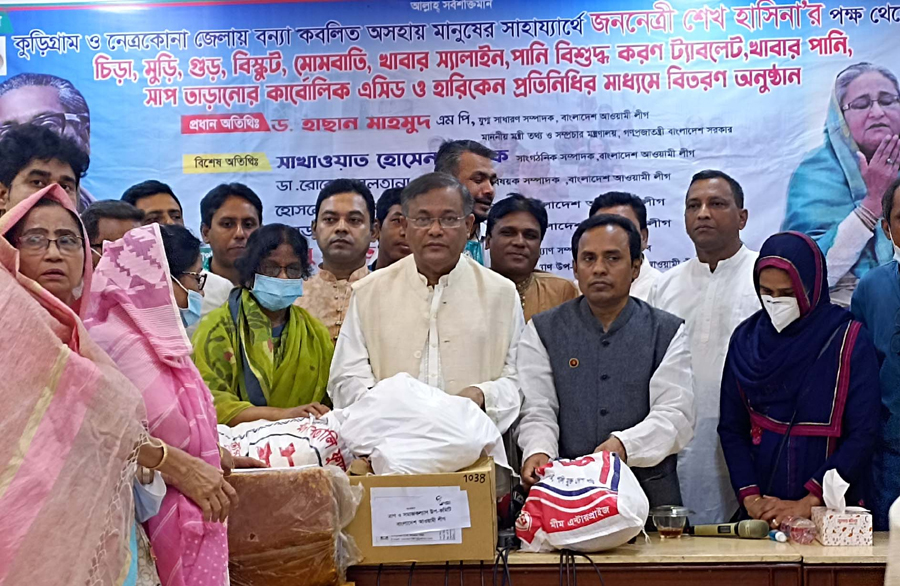 DHAKA, June 24, 2022 (BSS) – Awami League (AL) Joint General Secretary and Information and Broadcasting Minister Dr Hasan Mahmud today said the AL always remains beside the country’s people whether it is in power or not.


“Whether the Awami League is in power or not, it always stays by the people. It stood by them in the past and will do so in the future too,” he said.


On the other hand, he said, the BNP never goes to the people in crisis but does politics with them.


Hasan was addressing a relief distribution ceremony at the AL's Bangabandhu Avenue central office in the capital this afternoon.


On behalf of Awami League President Sheikh Hasina, the relief goods were sent to the flood victims of Kurigram and Netrakona districts.


Speaking as the chief guest, Hasan said reaching the affected people first is one of the main characteristics of the AL.

The AL has always been doing that as per the directives of Prime Minister Sheikh Hasina, he added.

Recalling the instances of the past, the AL joint general secretary said after the devastating cyclone of 1991, Begum Khaleda Zia was asked in parliament why her government did not take any action before the cyclone hit, leaving thousands of people dead.

“My family has taught me how to respect seniors, people's leader Sheikh Hasina also taught me. But I have to say something responding to others - then Pakistan Prime Minister Nawaz Sharif visited the country when the smell of corpses was spreading in the air of Chattogram.”

“Begum Khaleda Zia had changed seven saris in one day. And she stood in parliament and said – the death toll was less than the number of people who were supposed to die. That means they make fun of people and do politics with them,” he said.

Hasan said immediate after the flood hit the Sylhet region this year, the AL reached the flood affected people first like in the past.

“In many places, before the people of the administration reached, our leaders and workers rushed to (flood victims). Their own homes had gone under floodwater. Despite that, those who had capacity stood by the victims,” he said.

Noting that the prime minister herself went there, the information minister said now flood situation is deteriorating in the North Bengal, so relief materials are being sent there as per the instruction of the premier and the AL leaders and workers are distributing those.

“Where are the BNP and some prominent people who have NGOs now?” he questioned.

Some are sitting at talk-shows, but they are not seen standing beside the people, Hasan said, adding: “And Mirza Fakhrul is sitting in Dhaka and talking perplexed. In fact, the BNP never stands by the victims but it does politics with them”.