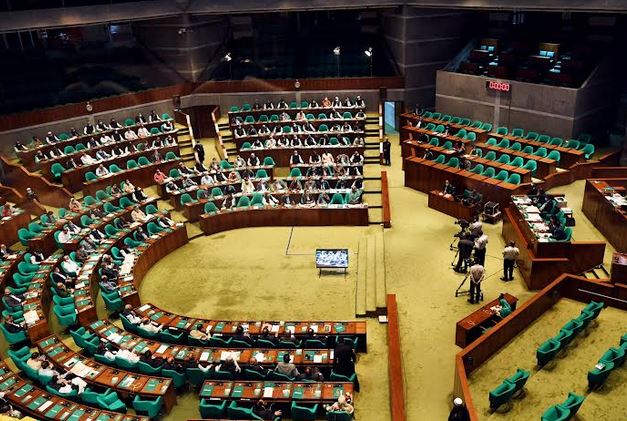 M Abdul Hamid's speech in the parliament saying the speech truly focused on
the tale of establishing a digitalized country under the leadership of Prime
Minister Sheikh Hasina in the last thirteen years.

They said the head of the state, in his 169-page speech yesterday, on the
first day of the maiden session in 2022 of the 11th parliament, highlighted
different development activities in various sectors including socio-economic,
political, cultural, education, youth and sports, information and
communication technology (ICT) and foreign relations.

Referring to establishment of a digitalized country, State minister for
Information and Communication Technology (ICT) Zunaid Ahmed Palak said,
"Bangladesh has turned into a middle income country from a least developed
one under the able leadership of the incumbent prime minister since 2008."

During the corona situation, the state minister said the government has
conducted uplift activities in various sectors through developing the
information technology infrastructure under the close supervision of
Information and Communication Technology Affairs Adviser to the Prime
Minister Sajeeb Wazed.

Participating in the discussion, Deputy Minister for Education Mohibul
Hassan Chowdhoury said the present government has taken an initiative to
develop skilled based education system as it will help reduce unemployment in
the country.

Mentioning that the president in his speech highlighted the development
goals for materializing the government's Vision-2031 and 2041, he said his
speech would inspire people to work jointly being imbued with the spirit of
Liberation War.

Earlier, the chief whip Nur-E Alam Chowdhury came up with a proposal for
holding discussion on thanksgiving motion of the president's speech in the
House with Speaker Dr Shirin Sharmin Chaudhury in the chair.

The lawmakers said the government led by Prime Minister Sheikh Hasina has
been working relentlessly to turn the country into a developed one.

They also thanked the president for delivering a timely speech
highlighting the success stories of the government and guiding the nation
towards peace, progress and prosperity.

Earlier, they paid rich tributes to Father of the Nation Bangabandhu
Sheikh Mujibur Rahman for his great contribution to establishing the
independent Bangladesh.