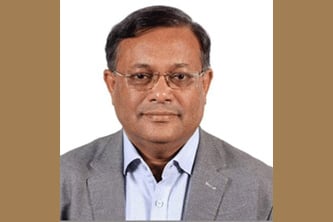 "A quarter with vested interest is out to create chaos and stigmatise the
students capitalising their movements for safe road ....It is evident from
the Monday's night incident," he told while exchanging views with newsmen at
his Secretariat office here.

The minister greeted the journalists at the beginning of the month of
victory and on the golden jubilee of the country's independence.

Mentioning that students are staging agitation demanding half fare and
safe road, the minister said, "Prime Minister Sheikh Hasina has directed all
concerned to implement the half fare for students in BRTC buses".

"Apart from this, the Dhaka Bus Owners Association has also declared that
they will implement the half fare for students from today (Wednesday). I also
hope that the bus owners of other cities including Chattogram will take the
same decision," he added.

But, a student was killed in a tragic road accident on Monday night, he
said, praying salvation of the departed soul.

He said, according to the witnesses, the accident took place around 10:45
pm on that night and 'Nirapad Sarak Chai', a facebook page, went on live at
10:57 pm and the news was aired at 'Telegram' channel, run by Jamaat at 11
pm. And the news was spread over all social platforms from the channel, he
added.

He said, "Now it is a question that how the facebook page 'Nirapad Sarak
Chai' reached the spot only after 12 minutes of the accident and aired live
telecast and how Basher Killa, a facebook page of Jamaat, knew the incident
only after 15 minutes? And how they torched 10 to 12 vehicles within 15
minutes?"

The minister said, "The students didn't torch the vehicles as they didn't
reach the spot within 10 to 15 minutes. It is now a question that where the
persons, who liked the facebook page that informed about the incident?"

The minister urged all countrymen to remain alert against them.

He said a case was filed and investigation is going on.

Legal actions would be taken against the culprits who were involved in the
incident, said Hasan, also Awami League joint general secretary.

Replying to a query over Union Parishad polls, he said AL candidates have
passed in the most UP polls and the rebel candidates are in the second
position. BNP is also taking part in the election tactically without party
symbol and Jatiya Party is also taking in the polls, he added.

About the treatment of BNP chief Begum Khaleda Zia, the minister said the
Premier has shown her unprecedented generosity by extending Begum Khaleda
Zia's release from jail.

He said Begum Zia is now undergoing treatment by his preferred doctors and
hospital. Besides, the demand of sending Begum Zia abroad is political, not
health related, he added.