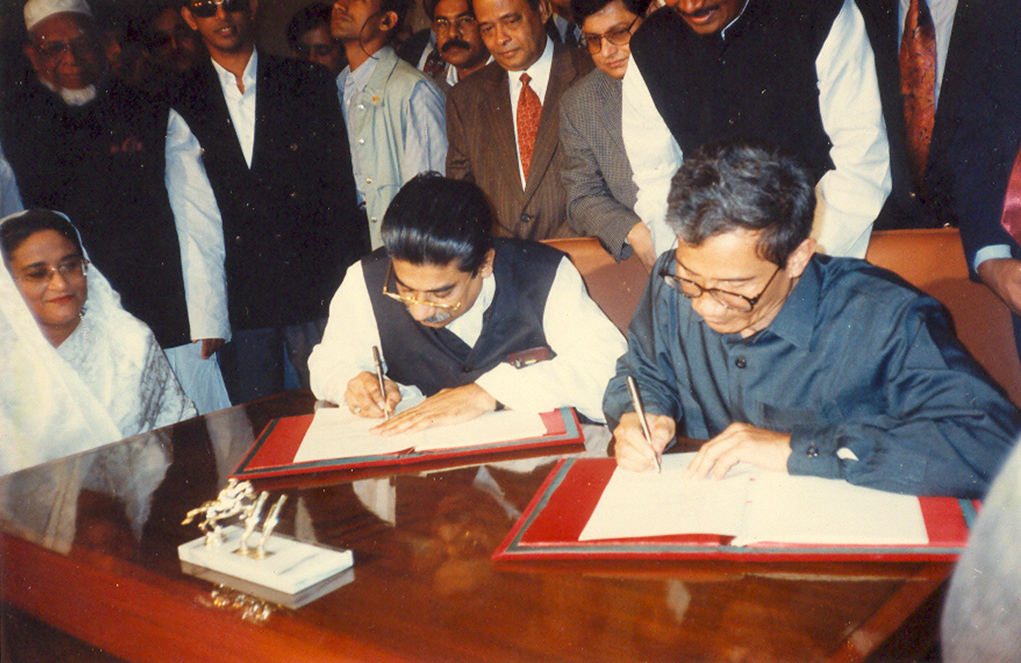 The accord was signed on December 2 in 1997 between the government and the
Parbatya Chattogram Jana Sanghati Samiti (PCJSS) during the first tenure of
Prime Minister Sheikh Hasina, ending bloody conflicts in three hill
districts.

The then Jatiya Sangsad Chief Whip Abul Hasnat Abdullah signed the
agreement on behalf of the government while Joritindra Bodhipriyo Larma
(Santu Larma) on behalf of PCJSS.

Both the President and the Prime Minister greeted all people in the
Chattogram hill districts on the occasion of completion of 24 years of the
pact.

In his message, President Hamid called upon all irrespective of party
affiliations to work together to make use of the potentials of hill
districts.

He recalled that the historic CHT Peace Accord was signed between the CHT
Affairs National Committee and the PCJSS on December 2, 1997 at the
initiative of Prime Minister Sheikh Hasina, ending long-standing conflicts.

"Signing of the peace accord at the initiatives of Prime Minister Sheikh
Hasina will remain as an example in peaceful settlement of disputes," said
the President.

As a sequel to the implementation of CHT accord, the CHT Affairs Ministry
and CHT Regional Council were formed, he said, adding that signing of the
accord has helped intensify socio-economic, cultural and infrastructure
development of the Chattogram hill districts.

In her message, Prime Minister Sheikh Hasina greeted the countrymen,
specially the people of the three hill districts, on the occasion of the
completion of 24th years of the historic agreement.

The Prime Minister sought cooperation from all for full implementation of
the CHT peace accord and thus building a prosperous, happy and peaceful
'Sonar Bangla' of Bangabandhu through socio-economic development of the hill
regions.

On December 2 in 1997, the historic CHT Peace Accord was signed without the
mediation of any third party, with a view to stopping bloody conflicts in the
CHT, the premier said.

"It is a rare incident in the world history . . . this peace accord brought
an end to the long-term bloody racial skirmishes in the CHT region and
established the trend of peace and development there," said the Prime
Minister.

Sheikh Hasina said achieving the UNESCO Peace Prize is a global
recognition to this accord.

The Prime Minister said the post 1975 undemocratic governments (after the
assassination of Bangabandhu) had created divisions between the Bangalee and
the mountainous people for their self-interest instead of maintaining social
stability there.

Killings, tortures and injustice, grabbing of land and wealth and misuse of
the state resources had made the region more unstable, she added.

She said after coming to the power in 2001, the BNP-Jamaat government
strongly opposed the accord had tried to create unrest in the area but they
failed to do so.

After coming to power in 2009, Sheikh Hasina said her government has been
implementing massive development programmes in all sectors, including
education, health, electricity, communications, infrastructure and mobile
networks in the region.

The Prime Minister said CHT is no more a backward locality because of the
timely steps taken by her government.