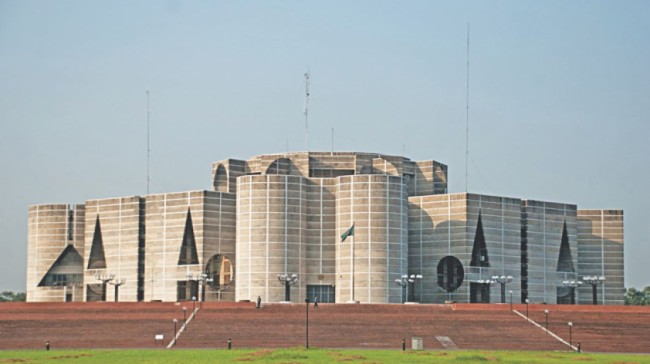 DHAKA, Nov 25, 2021 (BSS) - The proposal placed in Parliament under section 147 of the rules of procedure on the occasion of the golden jubilee of the country's independence was adopted unanimously today.

The Leader of the House Prime Minister Sheikh Hasina on Wednesday placed the proposal in the parliament to hold a special discussion marking the golden jubilee of the country's independence.

She joined the discussion on her proposal in parliament.

Earlier, at the beginning of the day's session on Wednesday, President Abdul Hamid gave a commemorative speech marking 50 years of independence with Speaker Shirin Sharmin Chaudhury in the chair.

A total of 59 treasury and opposition bench members of parliaments (MPs) discussed for 10 hours and 45 minutes on the proposal.

After the discussion, Speaker Dr Shirin Sharmin Chaudhury proceeded with the proposal asking the lawmakers to say “yes” or “no” for it and it was adopted unanimously in a voice vote.

Taking part in the discussion marking the golden jubilee, Agriculture Minister Dr Md Abdur Razzaque said Bangladesh would become a developed and prosperous country soon as the foundation of development has been built in every sector under the leadership of Prime Minister Sheikh Hasina.

He said Bangladesh has attained unprecedented progress in all socio-economic sectors.

Once the population was 7.5 crore and it is now over 16 crore but it has been possible to locally meet the demand of food for the huge population due to remarkable progress in agriculture under the leadership of Sheikh Hasina, he mentioned.

The minister said once foreign experts had opined that Bangladesh cannot survive self-reliantly but today their opinion has been proved as false as Bangladesh attained self-sufficiency in food.

Dr Razzaque said Bangladesh has not only made development in the food sector but also made massive progress on power generation, infrastructure, communication, health, education, ensuring shelter, and maintaining peace and discipline.

“Due to the capable and visionary leadership of the prime minister, the country has now become a role model of development in the world. Today, it is recognised globally,” he said.

Hasan, also the Awami League joint general secretary, said US President Joe Biden, in his message sent on the occasion of Mujib Year, mentioned Bangladesh as an example of development in the world.

Besides, he said, the World Bank president termed Bangladesh a role model of development.

Leader of the House and Prime Minister Sheikh Hasina yesterday brought a motion under the parliamentary rules of procedure 147 to hold a general discussion on the golden jubilee of the country’s independence.

Hasan took part in the discussion on the motion.

“We have been working to build a developed and prosperous Bangladesh which will set an example of intellectual thoughts and humanity,” he said.

That is why a generation having intellect, thoughts, human values, and modern knowledge must be built, the information minister said, adding that the government is working towards achieving this goal under the leadership of Sheikh Hasina.

Referring to the development and progress that took place in the country in the last 13 years, Hasan said Bangladesh today is far ahead of all other countries in South Asia, including Pakistan, in terms of development and social indicators.

Even, Bangladesh has surpassed Pakistan in all the socioeconomic indexes, he added.

Noting that Bangladesh was never independent before 1971, Hasan said the first “nation-state of Bangalees” was established only under the leadership of Father of the Nation Bangabandhu Sheikh Mujibur Rahman.

Bangabandhu had made the foundation of building a Sonar Bangla within only three and half years after independence but assassins didn’t allow him to materialize his dream into reality, she mentioned.

Following Bangabandhu’s footprints, his able daughter Prime Minister Sheikh Hasina is taking ahead the country at an indomitable speed facing different odds and local and international conspiracies, she said.