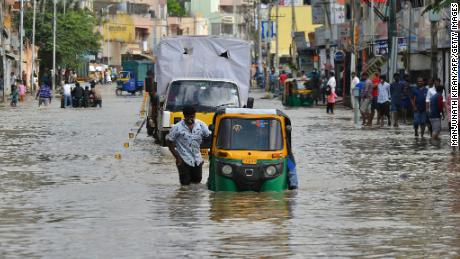 been inundated by floodwater after torrential downpours that have killed
scores of people across the country's south in the past few weeks.

Lakes dotted around the city have overflowed after three days of ferocious
rain, submerging roads and flooding homes.

"We can't go inside our house because the water has stagnated in front of
it," Bangalore resident Rathnamma told AFP on Monday.

"All our groceries are inside and we have been stuck outside the house
since 10 o'clock last night," she added.

Experts say unpredictable and extreme weather across South Asia is being
driven by climate change, exacerbated by damming, deforestation and excessive
development.

At least 30 people have been killed after flash floods around southern
India in recent days, according to local media reports.

Another 42 died last month when heavy rains pummelled the coastal state of
Kerala, prompting authorities to suspend an annual pilgrimage to Sabarimala,
site of one of Hinduism's holiest shrines.

A week of pounding rains also hit the city of Chennai earlier in November,
flooding most main roads and uprooting trees.