No troublemakers can enter AL like killer insects – Hasan 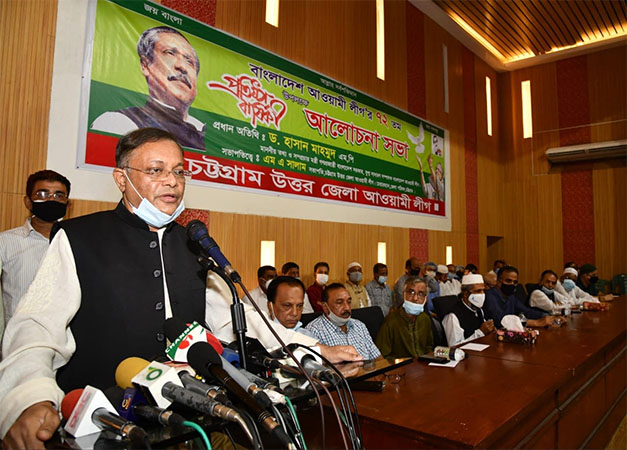 “If there are insects on a pillar of a strong house, then that house becomes risky. So, none can enter AL who can damage the party,” Hasan said.

The minister said that the government would be stronger if the party becomes strong.

The minister said this while addressing a discussion meeting as chief guest, marking the   72nd birth anniversary of Bangladesh AL on Thursday afternoon organized by Chattogram north district unit of AL held at Bangabandhu hall of Chattogram Press Club.

We hear stories of change in Singapore and Malaysia today. If the Bangabandhu’s daughter Sheikh Hasina gets a chance to run the country continuously, then the world will hear the stories of change of Bangladesh,” he added.

Dr Hasan asked the leaders and activists of AL to become polite before the people of the country for getting mandate continuously.

He said that AL came to the state power three times in a row due to the visionary and courageous leadership of Bangabandhu’s daughter Prime Minister Sheikh Hasina.
“Our leaders and activists have to project development before the people of the country,” he added.

The minister said that the vested quarters have repeatedly tried to murder Sheikh Hasina.

“Returning from the valley of death again and again, Bangabandhu’s daughter has never hesitated to go ahead for fulfilling the dreams of country’s people and established the people's right to vote and food,” he said.

“So, we have to keep our eyes and ears open. There have been many conspiracies over the last 40 years, we have heard for 21 years that the AL would never be able to come to power,” he said.

“But reality is that the AL has come to power four times under the leadership of Janonetri Sheikh Hasina due to her dynamic leadership,” Hasan said.

The Broadcasting Minister said that the-then government of Ziaur Rahman had hatched many conspiracies to prevent Bangabandhu’s daughter Sheikh Hasina not coming to the country.

“Braving many conspiracies, she came to Bangladesh on 17 May, 1981 ignoring risk of her life. She did not hesitate to come to her country,” Hasan added.

Dr. Hasan Mahmud said, "When Bangabandhu was assassinated in 1975, the GDP growth rate in Bangladesh was 7.4. We have overcome that record in the 2017-18 financial year after 40 years of Independence under the leadership of Sheikh Hasina.”

If Bangabandhu had not been assassinated in 1975, Bangladesh would have been a developed country long before like Singapore, South Korea or Malaysia, he added.