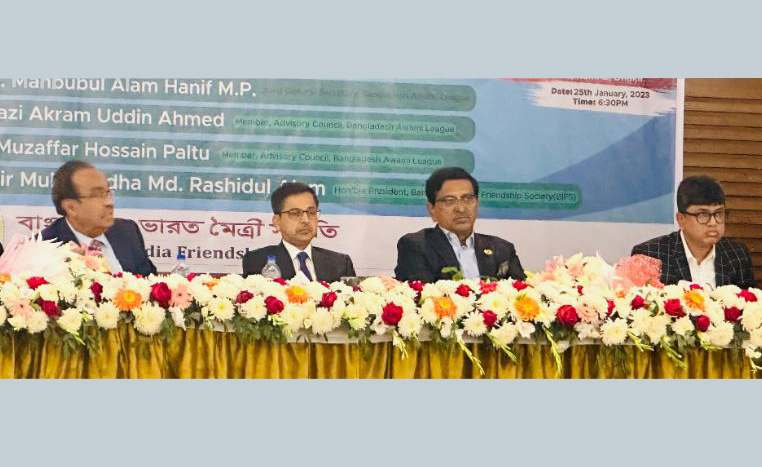 DHAKA, Jan 25, 2023 (BSS) – Speakers at a function today stressed the need for further strengthening bilateral ties between Bangladesh and India to ensure mutual benefits for both the countries.

They underscored the need for implementing the initiatives taken by the two prime ministers of both the countries for taking the ties to a new height.

Bangladesh-India Friendship Society (BIFS) organized the function to accord reception to the newly appointed Indian High Commissioner Pranay Verma in the city.

In his address, Hanif said that India has always been pioneer in promoting the struggle of Bangalees for independence. “And when the war of liberation started they extended all out cooperation to ensure victory of Bangladesh against Pakistan,” he said.

Indian High Commissioner Pranay Verma expressed that Bangladesh-India friendship society is a really the fact that carry the name of India and friendship in it in some way are the symbol of the true.

“We have a unique relationship. We share the relationship . . . as I said it builds people together and this friendly ties between our two countries since the war of liberation, in which is inspiration Bangladesh-India relationship,” he said.

“It is recognised as such as both India and Bangladesh and avenues for new year partnerships are expanding. I think the challenge before us to get inspired by the friendly history and build a more robust future of our cooperation,” the Indian envoy added.

Pranay Verma said that Bangladesh is graduating as the developing country from the least developed one which is to happen in 2026, adding, “This will really open up many more opportunities for us to economically engage with each other. We are already talking about and we are going to launch for a comprehensive economic partnership agreement.”

He said that the agreement will create the framework for taking advantage of the economic growth for both India and Bangladesh.

“We already have the example of the power plant in Rampal, the supercritical thermal power plant which was inaugurated during the visit of Honorable Prime Minister Sheikh Hasina to India last September. We expect both units to be operated.  We also have more power plants are being constructed for supply of power to Bangladesh and we also have an energy pipeline which will provide energy,” the envoy said.

Regarding issuing visas for Bangladeshi nationals, he said that visa issuing system will be smoother even more streamlined, adding, “We are working on it. Bangladesh is already one of the biggest visa service country that any Indian mission has anywhere in the world.”