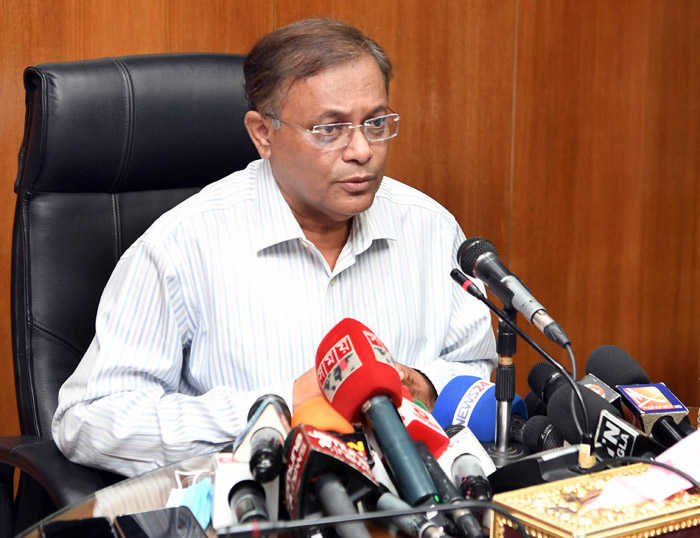 "BNP is getting Suhrawardy Udyan to hold their public meeting smoothly and without any hassle. Even, the date of conference of Chhatra League has been rescheduled. The government would take proper steps if BNP wants to hold their rally at Naya Paltan with the aim of creating anarchies," he said.

The minister said these to reporters at the meeting room of his ministry at the Secretariat in the capital.

Hasan said Awami League President and Prime Minister Sheikh Hasina has rescheduled the conference of Chhatra League on December 6 from December 8 so that BNP gets time to erect stage for their rally. It is easy to postpone any conference, but it is not easy to bring it ahead from the scheduled date, he added.

But, he said, Awami League did it for the BNP and the party is holding their rallies across the country peacefully. On the other hand, grenade, bombs attacks were carried on Awami League's rallies and people were killed during BNP's regime.

The minister said there was a permanent barbed-wire fence on both sides of the Awami League office when the party (AL) was in opposition and its leaders and activists were not allowed to go beyond the fences. Police used to charge baton if about 20 AL leaders and activists stood in Russell Square at that time and those pictures were found on social platforms till now, said Hasan, also AL joint general secretary.

The minister said police had charged baton on veteran AL leaders late Muhammad Nasim and Begum Matia Chowdhury. "Even, I was also hurt by police. None of their (BNP) leaders had to face such attacks during our 14-year tenure. They are holding their rallies peacefully as the government is assisting them," he added.

Replying to a query over militant issue, Hasan said BNP is the chief patron of the militants in the country and, for this, the militants have risen up. The recent ill activity of militants and BNP are linked, he added.

He said BNP had fielded 'Bangla Bhai' and he was given police protection when BNP was in power. Ruhul Quddus Dulu, Rajshahi former mayor Minu, Alamgir Kabir, Nadim Mostafa, Barrister Aminul Haque and many others were the secrete godfathers of Operation Killing Commander 'Bangla Bhai', he added.

He said bombs were blasted at 500 places across the country during BNP's regime and no steps were taken against the incidents.

The minister said currently BNP is making provocative statements in the name of rallies and trying to create an untoward situation in the country. The militant groups are also trying to be active, he added.

He said BNP is the chief patron and financer of militants and terrorists groups in the country.

Later, outgoing Chinese ambassador to Bangladesh Li Jiming paid a courtesy call on the information minister at his office.

In the meeting, they discussed different bilateral issues, including increasing communication in mass media, culture and commercial sectors to take forward the friendly relations of the two countries.