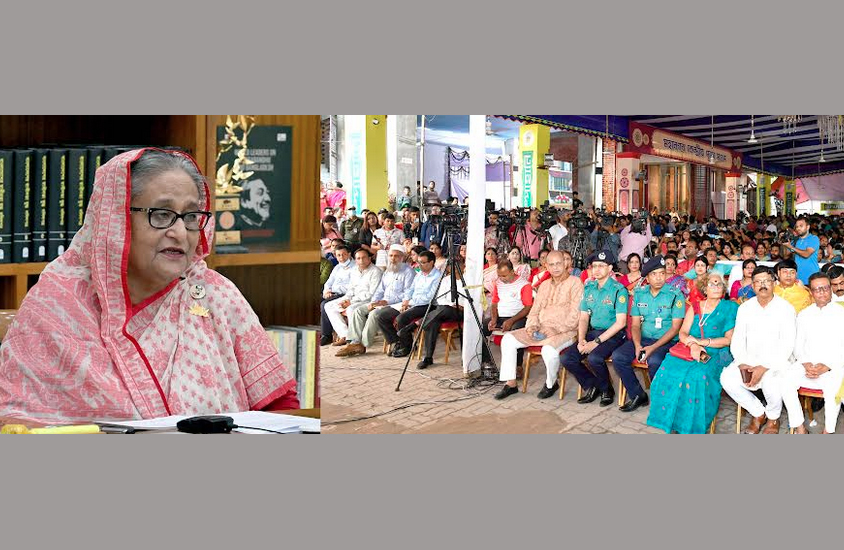 DHAKA, Oct 4, 2022 (BSS) - Prime Minister Sheikh Hasina today urged the countrymen to abstain from saying anything hurtful to the religious sentiments and magnifying any incident that goes against any religion, rather look at the punitive measures taken by the government.

The premier said this while exchanging greetings with the members of country's Hindu community on the occasion of Durga Puja on the Dhakeswary National Temple premises. She joined the programme virtually from her official residence Ganabhaban.

Sheikh Hasina said, "Don't magnify any incident that take place in any area (of the country), rather my request to all of you is to look at the punitive measures of the government against that incident."

She also sought cooperation from all, including the Hindu people, to maintain communal harmony in the country. "I will seek your cooperation in this regard and hope that you will cooperate," she said.

She added that the government always tries to uphold the non-communal spirit or secular character of the country and steps forward towards prosperity maintaining it.

The Prime Minister warned that none will be allowed to hit anyone’s religious faith , saying that religion is about one’s belief. “It is one’s belief on Allah or the Creator; we have to go with that spirit.”

Keeping this in view , she said that Islam is a very open and generous religion and there are directives in Islam to show respect to all other religions.

Sheikh Hasina  also mentioned about Surah Kafirun where it is stated that every person will perform their respective religious rites  and people from all faiths will enjoy equal rights. “And we believe it from our heart.”

The premier said that the government is always cautious to ensure religious harmony in the country.

She added “steps are always taken whenever any accident takes place, because we want that all citizens of this country whatever their religion will perform their respective religious ritual equally.”

The head of government expressed deep shock and sorrow at the deaths in a boat capsize in the Korotoa River in Panchagarh where Hindu devotees were heading towards Badheshwar Temple on the occasion of Mahalaya on September 25.

She mentioned that people of the country celebrate every religious festival of the all religion in united way which is very much unique.

“It is our great success that we are upholding this spirit,” she said, adding that there is no scope to undermine others.

Regarding the Russia-Ukraine war, sanction and counter sanction, she said not only the people of Bangladesh rather people around the whole world are suffering.

She said that inflation has increased, prices of every essential items have been increased and developed countries also are struggling.

She requested all to utilize every inch of land for producing something whatever that is.

In this regard, Sheikh Hasina requested all to take preparation from right now.

“We have our people, we have very fertile lands, let not any land uncultivated, produce whatever you can and maintain austerity in using everything including power and water. We have to work wisely considering our future,” she said.

The prime minister called upon the affluent section of the society to extend support to the welfare trusts.

To this end, Sheikh Hasina said that she has established Hindu Welfare Trust and donated a seed money to it.

She said that many rich people are there in the Hindu community and they used to spend a lot during Puja and other festivals alongside donation. “If you people donate a portion of your expenditure of Puja or festival to the welfare trust, it might help the destitute people.”

She hoped that they (affluent people) will pay concentration to it in future.

The premier said that this call will applicable for people of other faiths - -Buddhist, Christian, Muslim - - also as the government has established welfare trusts for all.