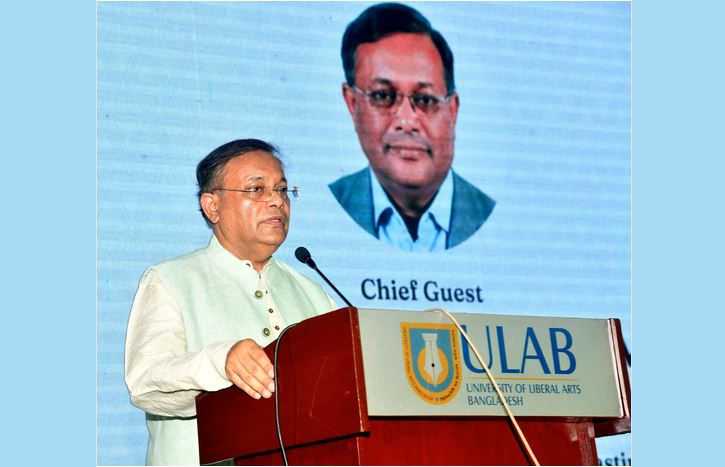 DHAKA, Oct 1, 2022 (BSS) - Rejecting the comments of BNP leaders, Information and Broadcasting Minister Dr Hasan Mahmud today said their statement over 30 seats (in parliament) is applicable to them.

"BNP leader Begum Khaleda Zia, during 2006 to 2008, had told that Awami League would not get more than 30 seats if the elections are held in free, fair and transparent manners. The 2008's polls were held in very neutrally and BNP got 29 seats. So, the statement of Mirza Fakhrul Islam Alamgir is applicable to BNP," he said.

The minister said these while replying to a query of reporters at University of Liberal Arts Bangladesh (ULAB) in city's Mohammadpur.

Hasan said Awami League (AL) will form government under the dynamic leadership of Prime Minister Sheikh Hasina through winning a landslide victory in the next general elections too.

Criticising a comment of BNP leaders over caretaker government, the minister said they can dream and there is nothing wrong to dream. But the dream is a nightmare for them as it will never be implemented, said Hasan, also Awami League joint general secretary.

The minister said there is no scope to go back to caretaker government system. The elections will be held under the Election Commission like in other democratic countries, including India, the UK, Australia, Japan and Continental Europe and the current government will discharge its duties as the election-time government, he added.

Replying to another query, Hasan said BNP wants conflicts and the party pushes the country's politics into violence. They killed their own activist in Munshiganj and will kill more in future also, he said, adding, they will try to put the responsibility of those violence on the government.

He said they (BNP) carried out grenade attacks on August 21 and killed many leaders including Ahsanullah Master and Shah AMS Kibria. They are doing these types of politics, he added.

He said BNP does the politics of killing while its founder Ziaur Rahman had captured the power through killing. And Begum Zia followed him (Zia), he added.

In fact, the minister said, BNP does politics of violence and they want to create an unstable situation across the country. But, the countrymen would not allow them to do so, said Hasan.

Earlier the minister addressed the eighteenth founding anniversary of the ULAB.

Quoting Indian former President late APJ Abdul Kalam, the minister said everyone should have dream to win in the battlefield of life and there should be efforts to materialize the dream.

The minister congratulated all concerned of the two media houses.