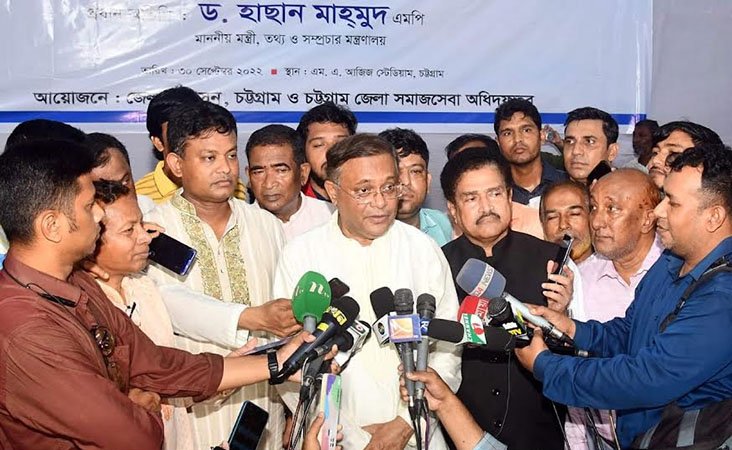 "BNP secretary general Mirza Fakhrul's comment in Thakurgaon that Pakistan (regime) was better and using national flag on stick and rod in Dhaka are intertwined," he told journalists after joining a cheque distributing ceremony at MA Aziz Stadium here.

He said BNP disregarded national standard and showed disrespect to the Liberation War, independence and sovereignty.

BNP created anarchic situation in different places and beat own activists in Munshiganj, he said, adding that now their target is to make an evil effort to create unrest in the country and if required, they will beat own activists to achieve their goal.

Hasan, also Awami League joint general secretary, said if BNP tries to create anarchy in the country again in the name of rally at divisional level, the government will deal their evil attempt with iron hand and the people will also resist them.

It's the government's responsibility to take action against anarchy makers, he mentioned.

Asked whether any investigation is carried out into the incident of removal of Chattogram deputy commissioner (DC) from his duty as a returning officer of Zila Parishad elections for joining a munajat during the filing of nominations, Hasan said hundreds of people joined Munajat there and as a Muslim if the DC do not join, it many could mark him as a non-religious person and that is why the DC might have joined the munajat.

He said who told what during the munajat, its responsibility cannot go to the deputy commissioner.

In this regard, the DC could be served a show-cause notice or he could be given a chance for self-defence and if his comments were not satisfactory then action should have taken.

The minister said the action, which was taken on the basis of few media reports and joining a munajat without giving a chance to self-defence, is a hurriedly taken one.

About distribution of Prime Minister's gifts on the occasion of Durga Puja, he said Bangabandhu's daughter thinks of all people including the marginal section of people.

From this thought, her gifts for Harijan community got donation, he said, adding that the government has taken many steps for resolving accommodation crisis of Harijan community and rest of works will also done within quickest possible time.

The minister said the government has taken various initiatives for the promotion of club-based sports so that the youths stay away from drug addiction and do not involve themselves in various types of misdeeds including militancy.

Terming different types of grants are given to different clubs, Hasan said that the women's football team has become the champions of SAFF football because of time-befitting decision and leadership of Bangabandhu's daughter.

"They have made impossible into possible. All the players have emerged from Bangamata tournaments from remote areas. They are the pride of nation today," he added.

Later, the minister also joined a meeting with the heads of various departments of the administration, city and district level leaders of Puja Udjapan Parishad on the occasion of upcoming Durga Puja at the BKSP conference room.