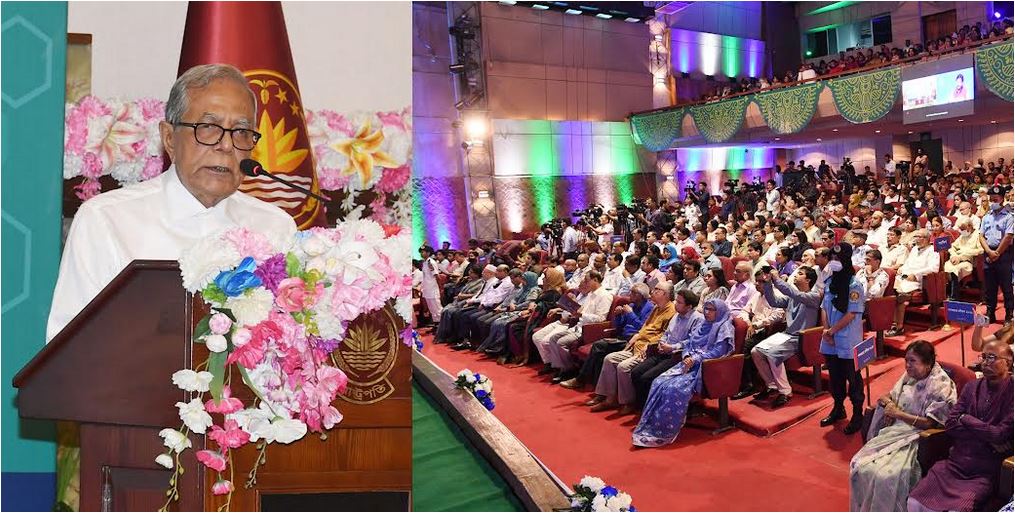 "Alien culture is constantly infiltrating our local cultural arena due to the sky culture . . . You must discard the unnecessary alien degenerate culture," he told a function at the Bangladesh Shilpakala Academy here marking the distribution of ‘Shilpakala Padak 2019 & 2020'.

Virtually joining the function  from the Bangabhaban's Gallery Hall, the President said initiatives should be taken at the grassroots level to develop non-communal culture imbued with the spirit of the War of Liberation war.

To develop sound and humane citizens, he said a healthy culture should be flourished at the individual, family, social and national levels.

To turn the country's youth into modern, skilled manpower, they should be involved in cultural activities, he observed.

President Hamid also asked for starting the cultural practice from the grassroots, especially from the respective families.

Referring to the contribution of the Father of the Nation Bangabandhu Sheikh Mujibur Rahman in the development of the country's cultural arena, the President said Bangabandhu established the 'Bangladesh Shilpakala Academy' on February 19, 1974 and its activities have now expanded to 492 upazilas of 64 districts countrywide.

Abdul Hamid said various activities organized by Shilpakala Academy on the occasion of "Mujib Borsho" celebration have played a commendable role in spreading Bangabandhu's life and works as well as his artistic and cultural ideas, among the people at home and abroad, especially at the grassroots.

The President said everyone at the grassroots level, irrespective of caste and religion must be aware of the nation’s modern culture and traditions.

Terming the culture as a mirror of life, Hamid said, “The development and tradition of our culture also shows how advanced and modern we are as a nation.”

"Our culture can play a major role in the fight against militancy and terrorism," the Head of the State added.

He said, "Young children and youth are tired of chasing various apps, including Facebook, YouTube, Tiktok, games. Mobile and laptop have become the main means of entertainment and sports as well."

If they continue doing like this, they will forget their actual history and heritage one day, Hamid said, expressing his concern.

"Culture is the bulwark against social degradation . . . The development of culture is very important to eliminate militancy, fundamentalism, violence and hatred from the society," the President mentioned.

"An enlightened society can build a humane society, ensure the desired prosperity and welfare of a country and nation," Abdul Hamid said.

In the function, 20 talented artists were awarded medals.

At the Bangabhaban side, secretaries concerned of the President's Office were present  on the occasion.