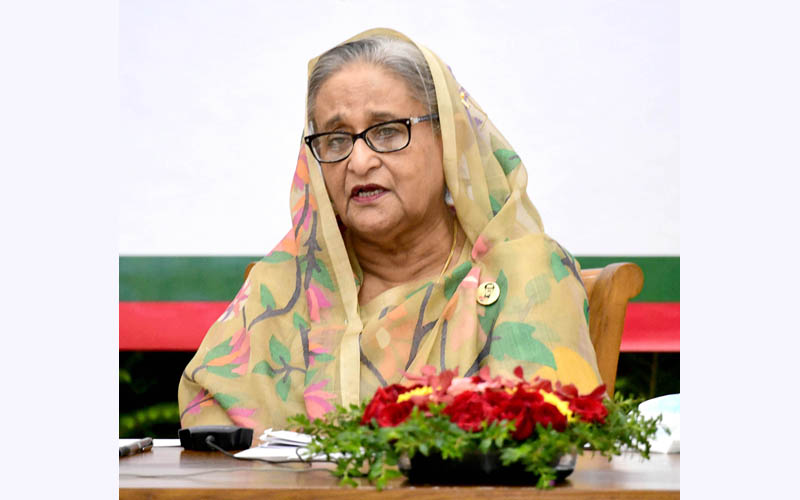 DHAKA, July 5, 2022 (BSS) – In view of the global trend of price spiral, power scarcity and looming food crisis due to the coronavirus pandemic and Russia-Ukraine war, Prime Minister Sheikh Hasina today called upon all to be cautious in using electricity, make savings and grow more foods to ward off the situation.

“We have to be cautious from the very beginning. If we move ahead carefully, InshaAllah we will have no problem. This is my belief,” she said, addressing the 47th founding anniversary celebration of the President Guard Regiment (PGR) at its headquarters in Dhaka cantonment, joining the programme virtually from her official Ganobhaban residence here.

The Prime Minister said the price inflation is taking place globally even in the developed countries like America, England and Great Britain are now facing acute power crisis because of continued price hike of the electricity producing elements such as gas, diesel and LNG while the coal is not available mainly for the ongoing pandemic and Russia-Ukraine war.

She added that the world is also currently facing transportation problems as ships are not being operated regularly due to the war.

“But, the problem which is being created is not only a problem of ours but of the entire world. The Coronavirus and Russia-Ukraine war have pushed up the prices of oil across the globe and many countries are now facing power crisis. Besides, each country is now facing scarcity of everything,” she said.

The Prime Minister said she is thinking of imposing area-based specific-time load shedding to reduce the use of fuel in generating electricity in the power plants.

She added that she is considering reducing electricity production for some time to save the fuel for producing power.

In this connection, she said the countrymen had witnessed 8 to 10 hours of load shedding everyday during the BNP-Jamaat regime.

“In that case, if we become economical and increase our savings, we can face any situation,” he said.

The Prime Minister asked every person, family and organisation to bring every inch of their land and water bodies under cultivation to grow more foods so that no food crisis can hit Bangladesh.

“Famine has started in many developed countries,” she warned, reiterating her call to give topmost priority to growing foods to reduce pressure on the market.

The Prime Minister said her government has reached electricity to every house, and is giving home to every homeless and landless person to take the country forward towards prosperity free it from hunger and poverty.

Sheikh Hasina said the construction of the Padma Bridge with own finance is a befitting reply to those who wanted to malign Bangladesh with false allegations of corruption.

"By building the Padma Bridge with our self-finance, we have given a befitting reply to those who wanted to malign Bangladesh or humiliate me and my family members, minister, my advisor and secretary bringing false allegations of corruption," she said.

The Prime Minister said the Padma Bridge is not only a bridge, rather it is the symbol of the country’s independence, sovereignty and unique ethnicity.

She said the decision of constructing the bridge with own resources has changed the mindset of the world regarding Bangladesh’s ability as they earlier used consider the country as a seeker of alms and grants, adding, “Now, we have proven that Bangladesh can do its own job and it doesn’t require to bow down to any one as we are a victorious nation.”

Regarding food, the Prime Minister said that her government and her party, the Awami League, has been extending all possible assistance to the flood affected people of the Sylhet region.

She asked all concerned to take preparations as the southern part of the country can experience more flooding with coming down of the water as it is now in the mid region of the country.

The Prime Minister asked all concerned to take prompt measures for massive cultivation of food immediately after the flood water starts receding.

She said Bangladesh has attained the recognition as a developing nation due to multi-dimensional measures to lift the country from a least developed one.

"We have achieved the status of a developing nation and we have to march ahead to become a developed and prosperous country by 2041 maintaining the present status. To this end, we have given future plans like Delta Plan 2100 to ensure a better future to next generations," she said.

Against the backdrop of fresh surge in the Covid-19 infection and death rates, the premier asked all concerned to maintain safety measures properly, saying that her government has given the Coronavirus vaccine to the people free of cost which many developed countries could not.

She asked all the people to take booster doses of the vaccine as some people are found reluctant to this end.

Spelling out the measures for development of the armed forces, the Prime Minister said her government has been implementing the Forces Goal 2030 formulated in line with the Defence Policy-1974 prepared by Father of the Nation Bangabandhu Sheikh Mujibur Rahman, aimed at making the forces - army, navy and air force - modern, time-befitting, trained and equipped with ultra-modern arms, ammunition and equipment so that they could compete with the world.

She reiterated that her country would not fight with any country as it follows the foreign policy, “Friendship to all, malice to one,” formulated by the Father of the Nation.

"But as an independent country, we have to take every kind of preparation, especially building up the organisations that are the symbols of independence and sovereignty. We have taken steps keeping that in mind,” she said.

The Prime Minister asked the PGR personnel to work with sincerity, patriotism, professionalism, honesty and efficiency being inspired  with the motto, “Unprecedented security is the target of guards.”

She greeted the PGR personnel for ensuring security to her braving rain, storm and scorching sun and risking their lives, saying that she knows that she might be under a life threatening situation any time.