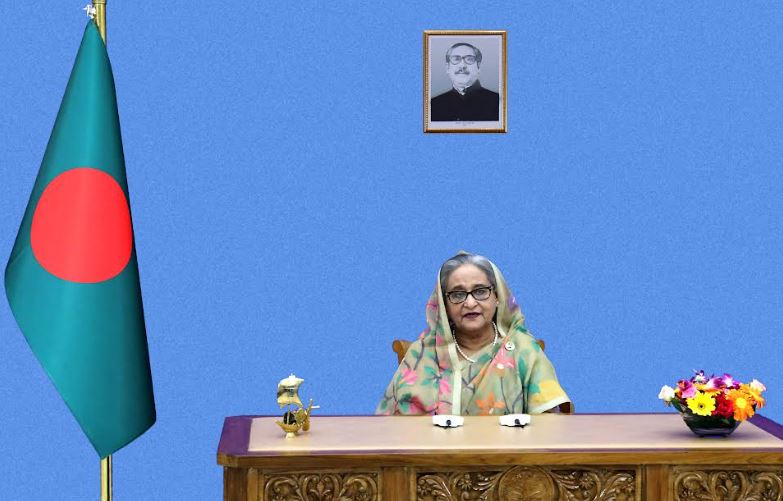 "We would deeply appreciate if Japan and other OECD countries do it (to extend preferential facilities) at least till 2029 to help us attain the overarching goals of sustainable development by 2030," she said.

The Prime Minister said this in a video statement aired in the 27th International Nikkei Conference on the Future of Asia.

The two-day conference titled "Redefining Asia's role in a divided world" is being held in the Japanese capital Tokyo in a hybrid format with both streaming and on-site attendance.

The Prime  Minister  said Bangladesh has attained the United Nations recognition for graduating from a Least Developed Country to a developing nation in 2026.

"We are already taking various measures for a smooth graduation," she added.

She said Bangladesh has urged its friends and partners through the UN mechanism to consider extending preferential facilities to Bangladesh for an extended period beyond 2026.

"Bangladesh is at different stages of negotiations on FTA with several countries, and opens to negotiating FTA and CEPA with other countries, including Japan," she said.

The Prime  Minister   reminded the conference that Bangladesh is hosting 1.1 million forcibly displaced Rohingyas from Myanmar and they must be sent back to their homeland in the Rakhine State of Myanmar in safety, security, and dignity.

"We request you all to contribute and help us find an amicable settlement of this crisis," she said.

Describing Asia as the largest and the most populous continent of the world hosting about 60 percent of the world's population, she said that it is also the home of most of the poor people of the world.

"Therefore, it is imperative to ensure peace among conflicting countries by resolving differences through discussion. Only by creating an environment of peace and stability, the countries of Asia can improve the socio-economic condition of the people," she opined.

In this connection, she said Bangladesh follows the Father of the Nation Bangabandhu Sheikh Mujibur Rahman's foreign policy "Friendship to all and malice towards none".

It has been acknowledged by a United Nations resolution, "Culture of Peace" adopted in 1999, and thereon every year, she said.

As governments of Asian countries, she said they have gathered here to share their perspectives in addressing the theme of this year's "Future of Asia" conference.

The Prime  Minister  shared five ideas in the conference for building future Asia, saying, "Let me conclude by sharing some ideas with you for your reflection."

Sheikh Hasina in her first proposal said that the Asian countries need to extend the hands of friendship, understanding and cooperation to each other, and promote solidarity to address division.

In the second and third proposals, she said they may explore how the soft power of ICT can be best used as a powerful tool to bridge the gaps between our countries and the Asian countries' need to safeguard fairness, respect, justice, inclusiveness, and equality in actions and deeds.

The Premier  opined while spelling out her fourth and fifth ideas that Asia's future will depend on sustainable and balanced development, improving international order and establishing win-win international relations and the Asian countries have common development challenges and should face them unitedly and collectively.

In the Asia-Pacific region, she said, "we must combine our forces to share good practices, knowledge and technologies to help address our common challenges".

The Premier  said Bangladesh has just completed the celebration of the 50th anniversary of its independence, and the birth centenary of Father of the Nation Bangabandhu Sheikh Mujibur Rahman.

Sheikh Hasina mentioned that Bangladesh and Japan have been enjoying excellent relations since our independence in 1971.

She said, "We remain deeply grateful for the invaluable support and contributions of Japan and its people, including school-children, during our War of Liberation. Japan was among the first to recognize the newly independent Bangladesh on 10 February 1972."

In Bangladesh, over the last 13 years, the premier said they have made development pro-people and inclusive.

She said her government has redefined socio-economic perspective to move forward with leadership and vision to build a knowledge-based, prosperous and modern nation.

At 50 years of our independence, the premier said they are delighted that the Sonar Bangla or Golden Bangladesh- that Bangabandhu dreamt of for the people of Bangladesh - is in the making.

Stating that Bangladesh, as rest of the world, was heavily affected by the ongoing COVID-19, she said before the pandemic in 2019, Bangladesh's GDP growth rate was 8.15 percent and in 2020, it could maintain a positive growth rate of 3.51 percent followed by 6.94 percent in 2021.

"We expect to attain over 7 per cent growth rate in the current fiscal year," she said.

While tackling the impacts of the pandemic, the Premier  said they have tried to make a balance between lives and livelihoods.

Indeed, her government could successfully manage the challenges of the pandemic relatively well, she added.

"Our efforts have been recognized in the Nikkei's COVID-19 Recovery Index for April 2022, where Bangladesh is ranked 5th out of 121 countries, and the best-performing country in South Asia in COVID management and recovery," she rejoiced.

She added that Bangladesh's GDP is projected to grow to USD 465 billion, merchandise export income over 52 billion USD, remittance over USD 21 billion, and per capita income at USD 2,824 in the Fiscal Year ending in June 2022.

She said that Bangladesh has been active and vocal on climate change action in all discourses, including at the recent COP-26.

She added: "We have taken up the Presidency of the Climate Vulnerable Forum for 2020-2022 to act as a voice for the 48-member countries most threatened by climate change."

Bangladesh mooted the idea of SAARC and BIMSTEC to promote regional cooperation, the Prime  Minister  continued.